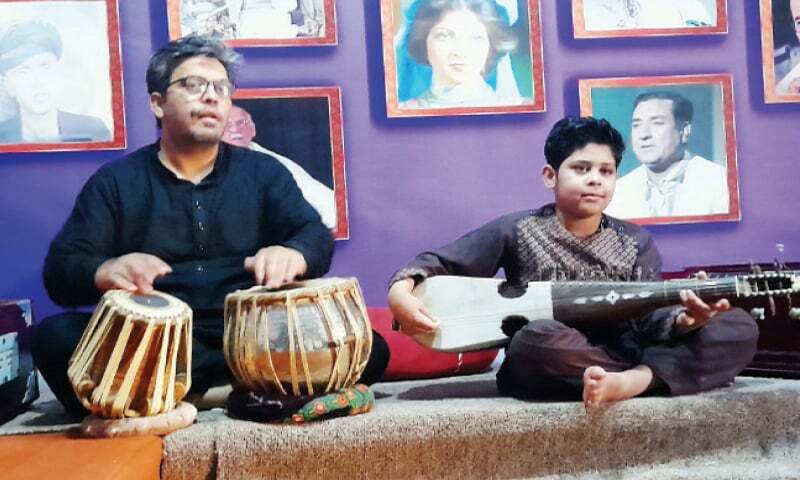 PESHAWARR: Mohammad Abbas Hairat, a young Afghan rabab player, said Pashto folk music should be preserved for future generations as it reflects the aspirations of the Afghan people.

He told this scribe that the rabab being an integral part of the typical Pashto music orchestra should be preserved against the onslaught of digital musical devices. He said he migrated to Pakistan with his father about two months ago to officially launch his music career and resume his studies.

Abbas Hairat, 10, has learned to play the rabab, the most difficult stringed instrument, and can play 20 to 30 popular folk tunes. He said he learned the basics of rabab from his grandfather Kameen Gul Ustad when he was six years old.

He said he went to a private school in Jalalabad when Kabul was taken last August by extremists, who banned music and made life miserable for artists.

Abbas, 10, emigrated to Pakistan two months ago with his father

“My father, a saxophonist, wanted to join his music group to which he had been affiliated for a long time. I too accompanied him, leaving behind all our family members because they did not have valid travel documents, ”said the young artist.

He left everyone in awe when he was recently invited to perform at a private music concert in Nowshera district. The video of his performance quickly went viral and he made a stunning debut.

“I set myself two goals, the first to complete my studies alongside musical performance and the second to play cricket. I am eager. We Afghans must preserve folk music for our future generations as it reflects our national aspirations and dreams, signifying our cultural identity,” said Abbas Hairat.

He said his first performance encouraged him to perform in public, which would allow him to earn enough money to at least cover his education costs.

Inspired by famous Afghan rabab player Humayun Sakhi, he said he too would gain name and fame by playing rabab. He said Afghan folk singer Naghma gave him a beautiful rabab and he would soon dedicate a video featuring the popular Pashto folk song “Larh Sha Nangarhar Ta” to her.

About future plans, Abbas Hairat said that he is busy recording some video albums for the upcoming Eid.