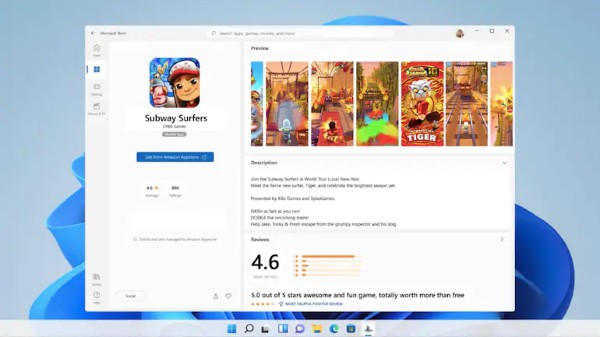 Support for native Android apps is one of the most attractive features of Windows 11. Microsoft showed how Android apps would work on Windows, but they weren’t ready for users in time. Microsoft announced last month that Android app compatibility, along with other improvements, will be available in February. It is finally here. Windows 11 now lets you download and use Android apps through the Amazon Appstore, which is currently in beta.

Microsoft has revealed that the Amazon Appstore now has over 1,000 apps and games for Windows 11. This is a much larger library than what was available on Windows 11 during the beta phase. Apps like Uber, Audible and TikTok, as well as games like Subway Surfers, are now available for download.

Users should first make sure that their PC can handle them. Microsoft has specified some minimum system requirements for your PC, including 8GB of RAM, an SSD, and a suitable processor.

“To get started with the preview, open and update the Microsoft Store (click Get updates in Microsoft Store > Library), search for your favorite titles, or browse our new collection of mobile apps and games; a Once you’ve found what you’re looking for, install them through the Amazon Appstore.

However, thanks to emulators like BlueStack, Android apps are nothing new to Windows. However, by natively enabling Android apps, Windows 11 eliminates the need for an emulator. Therefore, Windows 11 will run Android apps the same as Windows apps.

Unfortunately, since many apps aren’t designed to work on a large screen, you’ll usually view them in vertical mode. The Windows Subsystem for Android, which runs Amazon Appstore in a Hyper-V virtual machine and communicates with the Android API, enables native Android compatibility on the next Windows.

In the end, Windows 11 will officially support Android. It also implies that support isn’t limited to Amazon, which isn’t as well-known for Android as Google. As a result, Google has announced the Play Games app for Windows in a few select countries, bringing official Android games from your phone to your PC.

Although the catalog is tiny at the moment, Google has high hopes because it doesn’t want Amazon to drive Android adoption on Windows 11.

The taskbar now has a mute/unmute button and a Share this window option for Teams calls, as well as a reworked media player that replaces Groove Music and a revamped Notes app.

The Windows 11 upgrade is now available to all users worldwide, although Android support may be limited to users in the United States.

Meet the “killer bass player” of the UP community