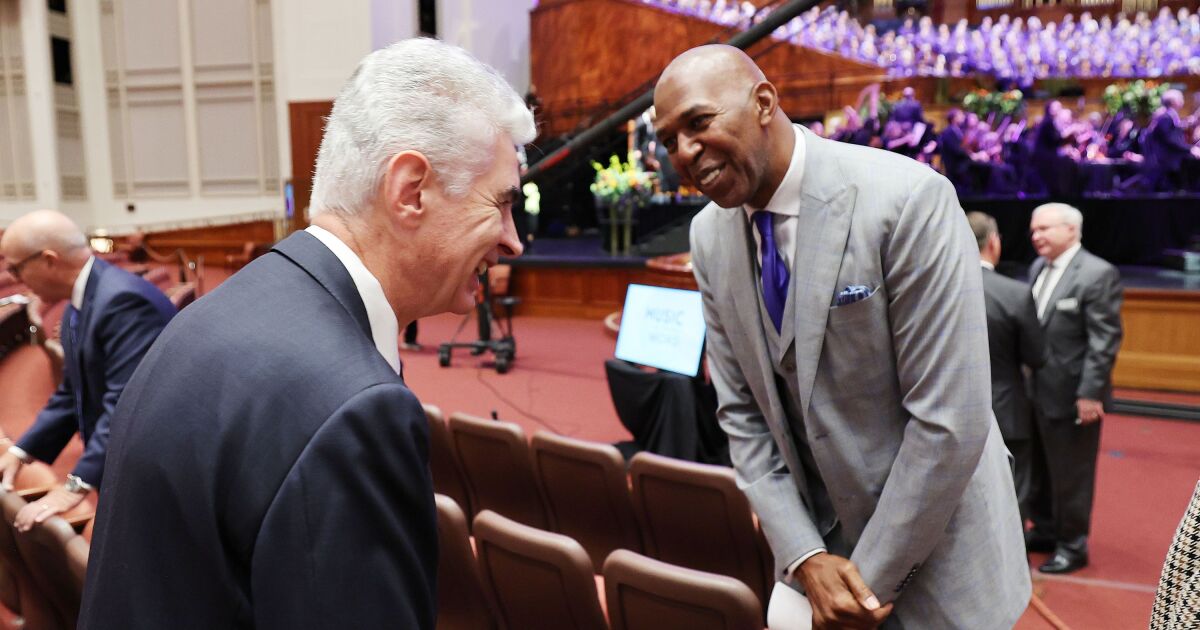 Thurl Bailey’s “rookie debut” as host for the Tabernacle Choir

Former NBA star and sportscaster Thurl “Big T” Bailey began a new calling on Sunday, August 21, as host of “Music & the Spoken Word” broadcast by The Tabernacle Choir in Temple Square and Orchestra at Temple Square.

About 15 minutes before the performance, Bailey, dressed in a gray suit, blue tie and coordinating pocket square, adjusted the microphone stand for his 6ft 11in height and with his recognizably deep voice. , he welcomed the conference participants. Center in downtown Salt Lake City at the weekly show.

“I am so honored and so privileged to be able to be here to welcome you all,” he said. “It is a pleasure for me to welcome you all here to this live broadcast of “Music and the Word”. Now, wherever you have traveled from, near or far, we are happy that you are here today with us in this beautiful conference center to witness this incredible talent.

He also asked how many people were watching the show for the first time – and many hands went up.

“So that means we have a few rookies here, but don’t worry, you’re not alone,” said the former Utah Jazz player and current broadcaster. “It’s my rookie debut as your official host today. But I’ve been told that if you come back again and again you’ll get the hang of it. So welcome, all newbies.

Bailey joins the group of three other rotating hostesses – Ruth Todd, Kathy Clayton and announcer Lloyd Newell. For Bailey, that also means working around his schedule with the Utah Jazz.

Bailey said he received an invitation from Tabernacle choir president Michael O. Leavitt regarding his involvement in organizing the choir.

“This is a great opportunity for me to represent not only members of the Church, but perhaps African Americans, who have never thought about the Tabernacle Choir or the Latter-day Saint faith,” he said in an interview. before the broadcast. “It’s a great opportunity for me to represent the Church as well, but also to represent people of color and people who, like me, have loved all kinds of music, and music means a lot to me, so I I am fortunate to be able to respond to this call and also share my gifts.

He also learns more about the organization of the choir and the story of “Music and speech” since his debut in 1929 as he prepared to be a greeter.

“And I think people are surprised that they don’t know about these musicians, this whole set, that they’re not being paid. They are all volunteers. … They dedicate their talents to doing it,” he said.

What does a greeter do for the Tabernacle Choir?

Prior to the weekly performance and broadcast of “Music & the Spoken Word,” the greeter will welcome the audience, acknowledge all guests, introduce the Tabernacle Choir, and share some history about the choir and “Music & the Spoken Word.” , and will share some “do’s and don’ts” for the audience, such as silencing cell phones and clapping until the end. It is considered a calling in The Church of Jesus Christ of Latter-day Saints. As the greeter speaks before and after the performance, it is not part of the show and only those present see the greeter.

On Sunday, Bailey recognized Presiding Bishop Gérald Caussé and his family, as well as those in attendance who were in town to celebrate the 100th anniversary of Brighton Girls Camp – considered the oldest youth camp in the Church of Jesus Christ. of Latter Day Saints.

“I want to give people the feeling that the doors are open to everyone, and I hope people can come in and out a little differently than when they came in through the doors,” Bailey said in an interview.

After the show, Bailey thanked the audience, wished them bon voyage and introduced the choir’s encore song – “God Be With You ‘Til We Meet Again”.

Later, Bailey had a group around him as they waited to talk to him or take pictures.

Bailey’s family had a 45 rpm record player growing up and had two records – one from the Jackson 5 and one from the Osmonds – that her family listened to regularly.

“I used to wake up in the morning to the sound of music before going to school. My mom and dad were dancing in the living room,” he said. “That’s what started my love of music.”

He played tuba and trombone and sang with church choirs and high school madrigals.

“I’ve always had a love for music. And as I get older, I’m pretty eclectic when it comes to my musical tastes — from the R&B I grew up on to standards and Frank Sinatra and Nat King Cole,” he said. He then branched out into more uplifting and spiritual music.

“I met my wife and fell in love with country music,” he said of his wife, Sindi Bailey. Thurl Bailey has also written and recorded his own music.

Although he has never sung with the choir and at 61 is older than the 25-55 age range for choir members, Bailey said he enjoys the music and watched as Sunday church times permitted.

“I am honored to be able to be in this position to do this and perhaps further interest those who are not of the Latter-day Saint faith in coming to experience music. … This music has a way of changing things, … of blessing you to feel closer to the divine,” he said.

“Music & the Spoken Word” airs Sundays at 9:30 a.m. from the downtown Salt Lake City Conference Center until September 11, when it will move to the Tabernacle on Temple Square through November. Doors open at 8:30 a.m. and attendees should be seated by 9:15 a.m. No tickets are required, except for General Conference Sunday. To see the choir website for information.

It streams live Sundays at 9:30 a.m. on the choir’s website at tabernaclechoir.orgthe choir Youtube channel, and on Broadcasts.ChurchofJesusChrist.org, BYUtv.org and KSL.com. Sound is available at Radio KSL, PARUradio and Amazon Alexa (must enable skill). Past episodes are available on request on the choir’s website Youtube channel, Facebook page and website. View streaming information by state and city at musicandthespokenword.com/viewers-listeners/airing-schedules.

Next week, August 28, The Piano Guys with pianist Jon Schmidt and cellist Steven Sharp Nelson will be guest artists on “Music & the Spoken Word.”