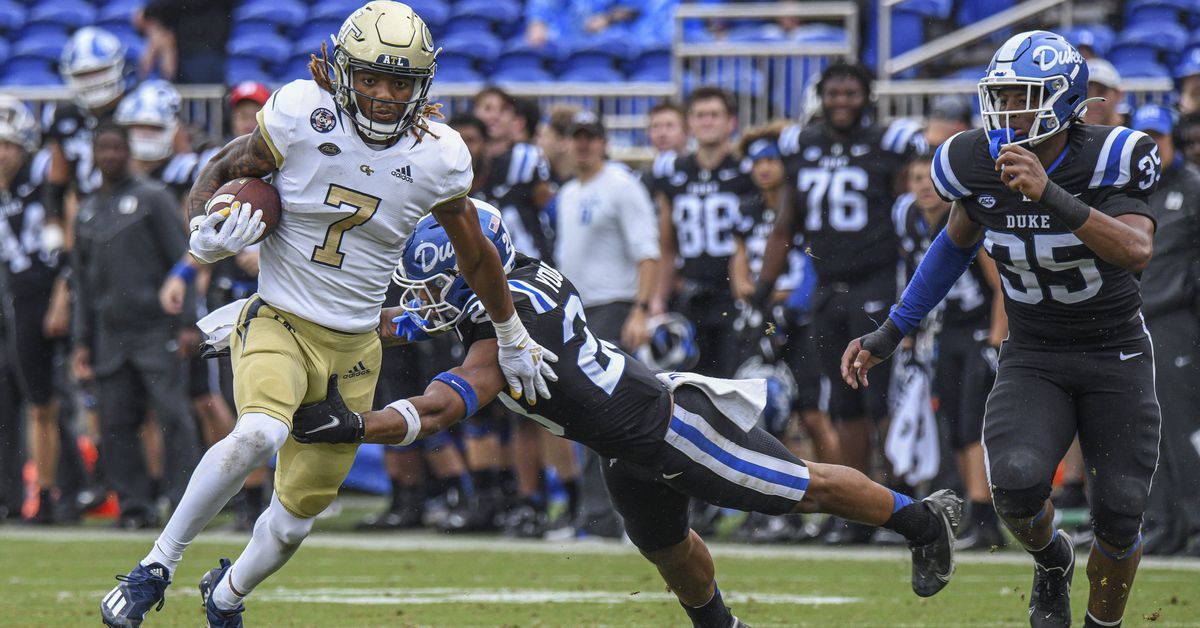 Thoughts of Tuesday 10/12: Winning over the common fan

Well, it was … a football game. It wasn’t pretty, but I guess a win is a win.

Three-sentence recap of the game

Tech has had a few explosive games on offense, but for the most part struggled mightily to keep the practices going.

The defense appeared to pay homage to Ted Roof by not giving up a ton of points but still allowing Duke to gain nearly 500 yards.

Adonicas Sanders. He’s been pretty calm this season, but he’s picked a good time to step up and make a big play on the green light touchdown.

ATLeast we are not them of the week

I can’t keep going after Vandy, so this week’s winner is Illinois. You might think losing 24-0 to Wisconsin doesn’t sound so bad, but I have some numbers for you:

Above the week line

Statistics of the week

38.7% success rate (as always, thanks to Robert for the advanced stats!). I’m going to talk about that a bit, but the way we won this game was with explosive plays, not efficiency. It may not be the worse problem in the world to have, but I really want to see more offensive efficiency. We can’t count on always being able to break a 70 yard with burst cover; we need to be able to move the ball more consistently towards the pitch.

We beat Duke, I guess
Sometimes wins can be empty
Let’s get more than three

It was a very bad game. Not much has happened, and honestly, I don’t feel like I can write a full review about it. For that reason, I’m going to turn things around a bit and give you a review that’s unrelated to the game at all. Here are my quick thoughts on the game:

Considering this week is our perfectly placed week off, I’ll be doing a recap of the first half of the season next Tuesday, so stay tuned for that.

Winning over the common fan

Seeing Duke having around 1000 fans in attendance on Saturday reminded me of our own struggles to fill the stadium.

For me, one of the biggest issues that technology isn’t addressing right now is the lack of interest from Atlanta residents. We spend a lot of time and effort trying to get support from the former rich, but we completely ignore a huge untapped market of literally people who live in the area and can easily catch the games. We hardly do anything to bring people from the surrounding community to Bobby Dodd on match day and that’s a big reason our stadium continues to be empty. We talk and talk and talk the way we are IN THE HEART OF ATLANTA yet we … don’t really do anything about it … and that puzzles me. There’s no reason a Tech game can’t be one of the area’s best social events in the fall.

Our product in the field isn’t quite at a point where it’s going to attract casual observers, so we have to get creative to get people to come. Lucky for all of you, I have a solution: Minor League Baseball style promotions. They are super creative and always feel so fun and engaging. Why can’t we harness this energy to get people into BDS? Make. Technology. Games. Amusing. We should be doing everything we can to get the people of our city to the stands on Saturday afternoon and I think that’s the best way to do it. To illustrate this idea, I have proposed some ideas for promotions that we could organize.

This one is a no-brainer: Do you want to pretend you’re the Atlanta team? Be the Atlanta team. Celebrate all things Atlanta in one day of play. History, culture, music, sports, it all. Invite local celebrities and show them off on the jumbotron. Have the group do a halftime show on the theme of Atlanta music. Play music from Atlanta artists only between rooms. Offer Atlanta-themed stuff. Like go, that’s how easy. Show the city that we want to kiss her and she’ll kiss us back. Atlanta United did a really good job and there’s no reason we can’t replicate that.

There are so many great local breweries in Atlanta and it’s a big part of the city’s culture, so let’s partner with them. Let everyone set up a booth in the concession areas. Give them space to set up sod with cornhole and garden sets. Have them brew tech-themed beers for the occasion to accompany their regular dish. Offer people (21+) a free beer ticket with their entrance fee. Loot draw. Divide the profits. It could be a win-win solution for us and the breweries.

Atlanta loves to celebrate the fact that we hosted the Olympics; lean into it. Make a retro theme with Izzy all over the place. Host pseudo-Olympic style competitions before kick-off outside the plaza. Invite and honor the former American athletes who competed in the 1996 Games. Do a 100-meter sprint on the field at half-time (draw lots for the opportunity to participate in this to get literally so much money).

Before you judge, listen to me: there is literally dozens of thousands of people coming to town for DragonCon. Give them $ 5 tickets (or even free entry with their DragonCon pass or something) to dress up and encourage the rest of the fans to dress up as well. Imagine 50,000 people all dressed up in the stands; that would be amazing to see and would get us a ton of national coverage. Make promotional material featuring the team and coaches inserted into content like Game of Thrones or Star Wars.

This one is easy as we are already affiliated with Children’s Healthcare of Atlanta. Make another special uniform only worn for this game. Make it very easy for customers to donate throughout the game. Ask the program to donate $ X for each first held during the game or something like that and make it a PARTY when it happens. Let people buy special packages (going to the field, boxes, unlimited concessions, visiting the locker rooms, etc.) where we donate most of the profits. Fill the stadium for a great cause.

I could go on for hours; there are literally so many possibilities. It doesn’t even have to be every home game, you can get by doing 2 or 3 a year. You just need to hook people up and show them that a Georgia Tech game can be a really fun way to spend a few hours. Don’t want to do a full promotional event? Here are some other ways to generate local interest:

[turns to look at GTAA] It literally only took me an hour to think about it. Let’s see some energy there, huh?

The next step is a welcome week off, then UVA (10/23, 7:30 p.m., ACCN). A few weeks ago I didn’t think the Cavaliers looked particularly good, but now they’ve just had two tight wins in a row over Miami and Louisville. They’re getting Duke this week, so I think it’s safe to say that they’ll be on a three-game winning streak when we come to town. What scares me the most is their passing game; they are the second best passing offense in the country with 413 yards per game. After keeping our top three opposing QBs under 150 yards apiece, we now have an average of 332 passing yards allowed in our last three games. This is a disturbing trend that UVAs may be adept at harnessing. On the positive side, their defense gives up nearly 30 points per game. I expect to see a lot of offense in this one. The key here in my mind is whether or not we can get a pass rush good enough to thwart their aerial attack. If we can do this and convert to attack so I think it could be a good win for us.