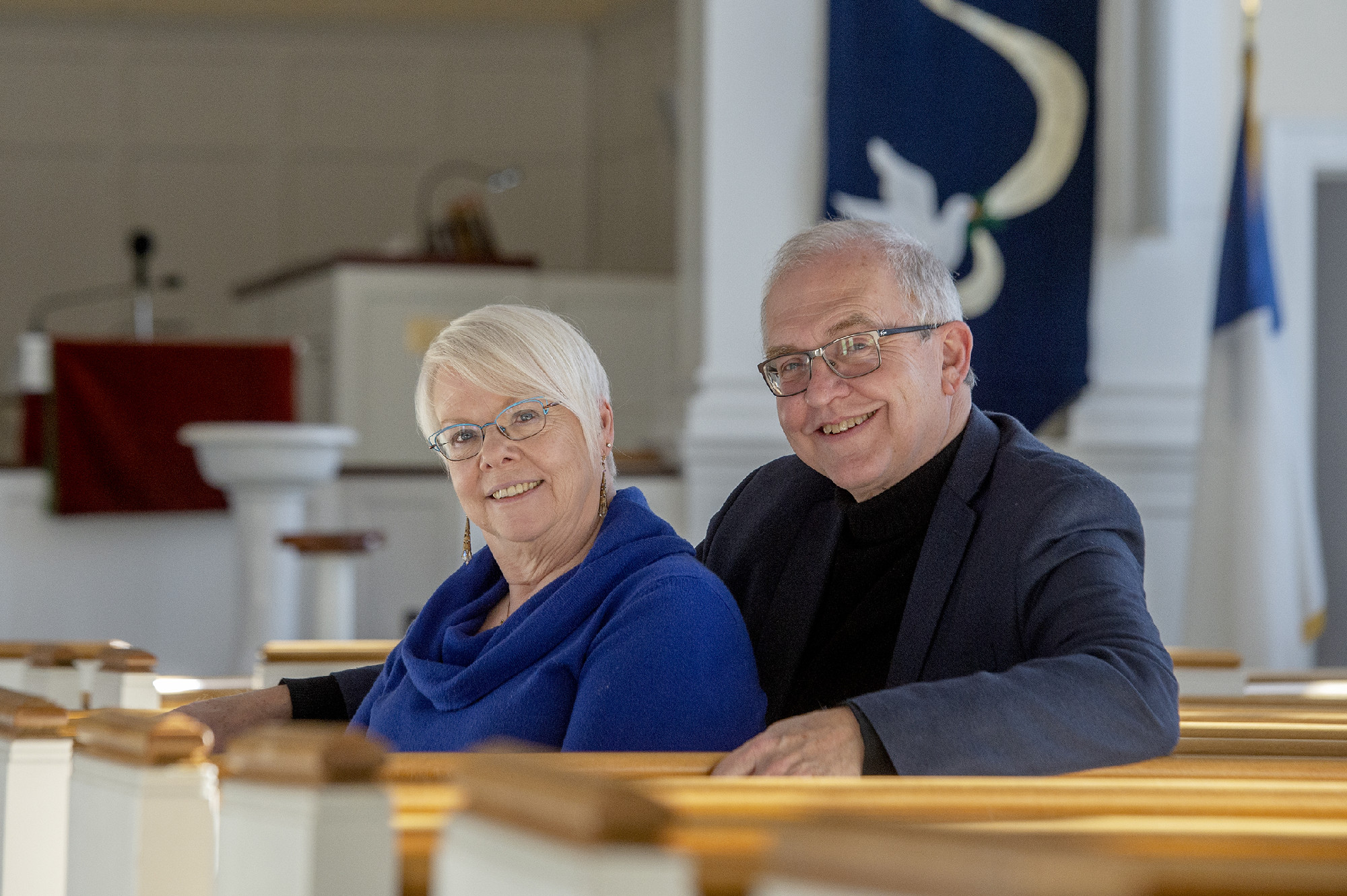 He composes. She sings. He plays the organ. She directs. They often work together and have been married for 45 years. They are Al and Sue Fedak.

“I know Al and Sue very well,” said Ann-Marie Barker Schwartz, violinist and founder of Musicians of Ma’alwyck. “They are great musicians, passionate about music and wonderful ambassadors for the music community. Al is also a gifted and quite famous composer in the world of sacred music. I must also say that they are both very funny. It’s always a pleasure to work with one or the other. »

“Al is one of the strongest organists I know. He plays very cleanly and his inscriptions are perfect. He has a delightfully dry sense of humor and is quick to share it. Sue has one of the most beautiful mezzo voices around and she is as kind as she is talented. His contagious laugh lights up a room.

High praise and rightly so when you take a look at both of their track records.

Al grew up in Elizabeth, New Jersey, starting the piano at age 5. At age 14, he won a scholarship to the Pingry School, an independent college preparatory school in New Jersey.

“They had a chapel and the students could play the pipe organ. I was blown away by 550 male voices singing for this brand new interest,” he said. “It was an immediate conversion.”

His parents quickly found him a guest teacher who gave organ lessons.

“She was 27, her name was Prudence Curtis, tall and beautiful, and I fell in love,” Al laughed. “She told me that I could succeed. She was responsible for what I became. One of my greatest joys is playing the organ.

A year later, at 15 and having learned to play with all four limbs (two hands and two feet) – “It can be very sporty”, he said – and practicing six to eight hours a day, which “suited my introverted personality,” he got his first gig at the local Methodist Church at $5 a week.
“That’s how I got involved in Protestant circles,” Fedak said.

He attended Hope College, a private Christian liberal arts college in Holland, Michigan, exercising in part by hosting up to three church concerts each weekend. Upon graduation, he earned degrees in organ performance and music history.

Hope College also introduced him to something else. He met Susan Hermance there during his first year.

“I grew up in Schenectady and attended Linton High School, Class of 1971,” Hermance Fedak said. “My parents were primary school music teachers and I was the eldest of seven children with my three sisters also into music. (They all taught locally.) I was also the fourth generation to go to Hope.

It is always sung. There are even photos of her at 20 months old sitting at a piano singing, she laughs. But she also played oboe, violin, and later viola in high school. In college, she had to choose and opted for the voice. She met Al when he hired her to sing in his church choir. She sang as a mezzo-soprano.

“I was engaged to someone else at the time, but realized I was falling in love with this guy and broke off my engagement,” she said. “We got married in 1976.”

Hermance Fedak earned a degree in vocal performance and began a singing career as an oratorio soloist with numerous choirs and orchestras that would continue for decades.

Once married, however, Fedak knew he had to find a way to earn a living. Without missing a beat, Fedak auditioned for the church in Pompton Lake, New Jersey, during their honeymoon and got the job. Later, he pursued other degrees, including a master’s degree in organ performance from Montclair State University and additional studies at Westminster Choir College (NJ) in church music; Eastman School of Music in Rochester on harpsichord; the Institute for European Studies in Vienna, Austria, in music history; and the Cambridge Choral Studies Seminar at Clare College in the UK.

It was in Pompton Lake that Fedak turned to composition.

“New Year’s Day fell on a Sunday and the choir and congregation needed a simple hymn to sing,” he said.

Fedak explained that a hymn is sung by everyone whereas a hymn is only sung by a choir. His anthem was based on a tune in only two vocal parts with an organ accompaniment.

“When you write an anthem, you have to consider that it will be sung by a non-musical, non-rehearsed group; that the notes and the words should match and if it’s good, the anthem should sound inevitable and not trivial,” Fedak said. “Every note should count. It’s like a miniature jewelry box.

His congregation loved his anthem, so Fedak took a chance and sent it to a publisher.

Although he sometimes checks for so-called “orphan texts” looking for a tune, most of what Fedak composes begins as an organ improvisation.

“My love of the organ drives me to do this and for the past twenty years I’ve only had to write to fulfill commissions,” he said. “I also like to write for specific events and artists . . . to carve out the room.

To date he has printed over 300 works for choir and organ; over 100 of his hymn tunes appear in hymns and collections around the world. Harvard University recently hailed him as “one of the greatest living composers of original hymns,” something Fedak was particularly proud of.

After the Fedaks settled in the capital area (they reside in Menands), he held organ positions in various churches or temples and is still the organist for Congregation Beth Emeth in Albany and is recently became organist at the First Reformed Church in Scotia. He also continues to freelance for many local musical organizations, including all local choirs, the Albany Symphony Orchestra, Empire State Youth Orchestra, and chamber music groups. Fedak has also performed solo around the world.

Hermance Fedak also transitioned into conducting with her own choir, the Hudson-Mohawk Chorale, which formed in 2015.

“I’ve always been interested in conducting, but there was no female conductor to emulate and the university wanted me to major in piano,” she said. “Rand Reeves [then artistic director of the Burnt Hills Oratorio Society] gave me the opportunity to lead and made me his deputy leader for two years. Then Alayne Trombley invited me to conduct the Saratoga Children’s Choir.

For three years after Reeves’ retirement, Hermance Fedak continued to lead the BHOS. But during the choir’s 10-day European tour in 2015 to Belgium, Luxembourg and the Netherlands, members suggested she might like to have her own choir.

“It was something like a dream,” she said. “So when we came back, I pursued the idea and on the first day of rehearsal, 55 singers showed up.”

While the tour had been “fabulous, it was more than expected without major hitches. We sang in cathedrals. It was very smooth,” a 2020 tour of Italy was postponed due to the pandemic.

Local concerts have also been suspended, although March rehearsals will hopefully begin for a concert on May 1. In the meantime, Hermance Fedak takes care of reading, crocheting, cooking, playing the piano and raising bees.

“My first job at 14 was as a florist’s helper and beekeeping is something I’ve always wanted to do since I was 7,” she laughed.

She also maintains a voice studio at Schenectady County Community College and privately.

The pandemic has put a damper on most organ performances, but Fedak is reserved with orders.

“I have to do an organ piece for the 100th chapter of the local American Guild of Organists; I have to write an organ choir for Westminster Church in Albany; and I’m working on a volume of evening anthems for one of my editors,” he said. “But music is my hobby. It’s a way of life.”

He also reads a lot of history books and has just discovered the classics of fiction, in particular by finishing reading seven plays by Eugene O’Neil.

The Fedaks have two adult sons, both of whom are musicians: Peter, who earned a master’s degree at New York University in audio engineering; and Benjamin, a drummer, who works in five different bands downstate; and a grandson.

More from The Daily Gazette: