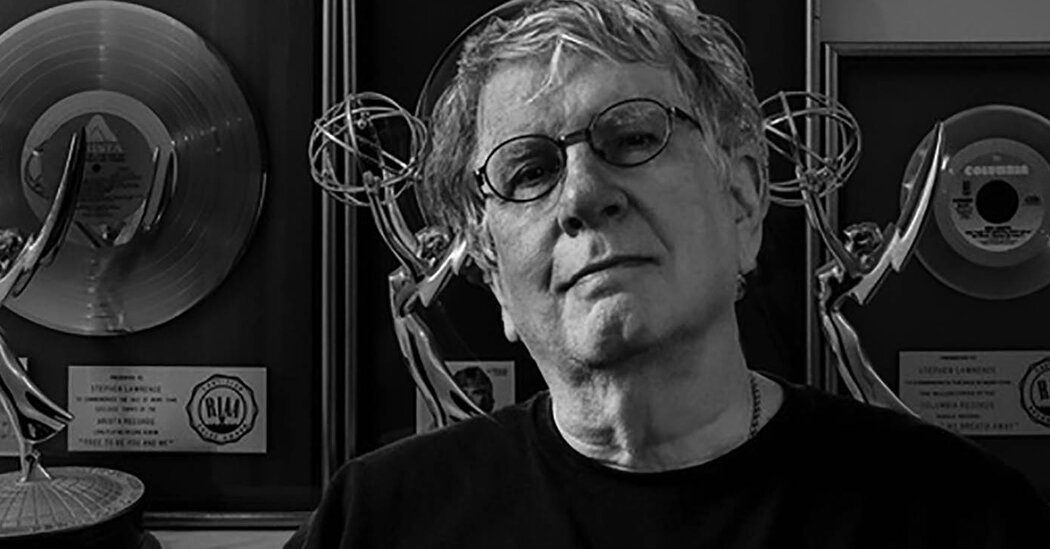 Stephen Lawrence, who provided a soundtrack of sorts for countless childhoods as musical director for the album and TV special “Free to Be…You and Me” and as longtime composer for ” Sesame Street,” died Dec. 30 at a medical center in Belleville, NJ. He was 82.

His wife, Cathy (Merritt) Lawrence, said the cause was multiple organ failure.

Mr. Lawrence had a knack for catchy tunes and song constructions that would appeal to young minds.

“One of the most effective devices, and for children one of the most important, is repetition,” he writes in “How to Compose Music for Kids,” an essay on his blog. “Have you written a first line that you like? Why not repeat it?

The essay went on to show how composers from Beethoven to John Lennon had done just that, and Mr Lawrence often used the device on ‘Sesame Street’ classics like ‘Fuzzy and Blue (and Orange)’, a number playful song from 1981 with lyrics by producer, composer and arranger David Axelrod.

One of Mr. Lawrence’s most captivating tracks was also one of his first for the children’s market: the title track to “Free to Be…You and Me,” the star-studded 1972 album and book designed by Marlo Thomas. The record, full of songs and stories celebrating tolerance and breaking gender stereotypes, became an enduring hit and was recently selected for inclusion in the Library of Congress’ National Recording Registry of Culturally Significant Works. .

Mr. Lawrence, in conjunction with lyricist Bruce Hart, was tasked with finding the opening number. A memorable folk melody recorded by the New Seekers, it begins with a banjo, an instrument little heard in pop and rock music of the time.

“Banjo was perfect for the intro to this song,” Mr. Lawrence told radio show “Soundcheck” in an interview marking the album’s 40th anniversary. “It’s kind of timeless. He says joy. He says non-sophistication – although part of the album is quite sophisticated. He says, ‘Listen. It’s an unusual instrument that you don’t hear every day. This will set up a song that you are going to love. “

Ms. Thomas had recruited a formidable list of stars to perform on the record. In addition to writing the music for several of the songs, Mr. Lawrence, as the musical director of the project, had the task of overseeing the recording sessions. That meant working with an array of quirky artists, some of them professional singers and others, like Mel Brooks and soccer player Rosey Grier, not.

Mr. Lawrence was a relative unknown at the time. Recording Diana Ross singing “When We Grow Up” (another “Free to Be” song for which he wrote music) at Motown Studios in Los Angeles gave him a pinch moment.

“I arrived at Motown Studios and thought of the many famous artists who had recorded there, none more famous than Diana Ross,” he wrote on his blog. “I realized that the whole ‘Free to Be’ project was taking my career to new heights.”

The album was a runaway bestseller and Mr Lawrence went on to compose over 300 songs for ‘Sesame Street’. Beginning in 1989, he was nominated multiple times, along with the show’s other composers and lyricists, for Daytime Emmy Awards for Musical Direction and Composition. He won three times.

Mr. Lawrence didn’t just work on children’s material. He composed the music for the 1973 baseball drama “Bang the Drum Slowly”, the 1976 horror film “Alice, Sweet Alice” and other films, and collaborated on several musicals.

Ms Thomas, however, said he was the perfect choice to reach young audiences.

“‘Free to Be…You and Me’ was first and always a children’s project,” she said via email, “so it needed a composer and musical director who could create songs that captured the imaginations and touched the hearts of girls and boys everywhere. . Stephen was that person. I loved him and loved working with him.”

Stephen James Lawrence was born on September 5, 1939 in Manhattan. Her father, Allan, ran a manufacturing business and her mother, Helen (Kupfer) Lawrence, was a homemaker.

He grew up in Great Neck, Long Island. He started taking piano lessons at age 5, and at age 17 won a New York radio station’s jazz piano competition. the prize was lessons with pianist Mary Lou Williams.

While majoring in music at Hofstra College (now Hofstra University), where he graduated in 1961, he composed music for student performances and other entertainment. One was a musical, “The Delicate Touch”; the book and lyrics were by a classmate, Francis Ford Coppola.

Mr. Lawrence came to the ‘Free to Be’ project through Mr. Hart, with whom he had written some songs and whose wife, Carole Hart, was producing the project with Ms. Thomas. The two women asked Mr. Hart and Mr. Lawrence to come up with a song that would introduce the album and convey what it was about. It was Mr. Hart who came up with the phrase “Free to be you and me” and incorporated that idea into the lyrics of an entire song, which he presented to Mr. Lawrence.

“As sometimes happens,” Mr. Lawrence recalled in his blog, “I had an idea right away and finished the song in a day.”

The label, Bell Records, told the band they expect to sell around 15,000 copies. Instead, sales topped one million. A 1974 television version, with Mr. Lawrence as musical director, adds to the phenomenon.

The Harts (he died in 2006, she in 2018) and Mr Lawrence worked together on other projects, including the 1979 TV movie ‘Sooner or Later’, which yielded Rex Smith’s hit ‘You Take My Breath Away,” written by Mr. Hart and Mr. Lawrence.

Mr. Lawrence began writing for “Sesame Street” in the early 1980s and continued to do so for years. The job gave him the chance to indulge in a wide assortment of musical styles. One of his first compositions for the show was “Kermit’s Minstrel Song” (1981, lyrics by Mr. Axelrod), which recalled Renaissance tunes. Ms. Lawrence said one of her favorites was “Gina’s Dream” (lyrics by Jon Stone), in which Mr. Lawrence did a very good job of impersonating Puccini.

Mr. Lawrence lived in Bloomfield, NJ His marriage to Christine Jones ended in divorce in 2000. In addition to his wife, he is survived by a daughter from his first marriage, Hannah Jones Anderson; Mrs. Lawrence’s sons, Sam and Nicholas Kline; and a grandson.

The incredible power of TikTok for touring: The new social media giant is leading the way on the road