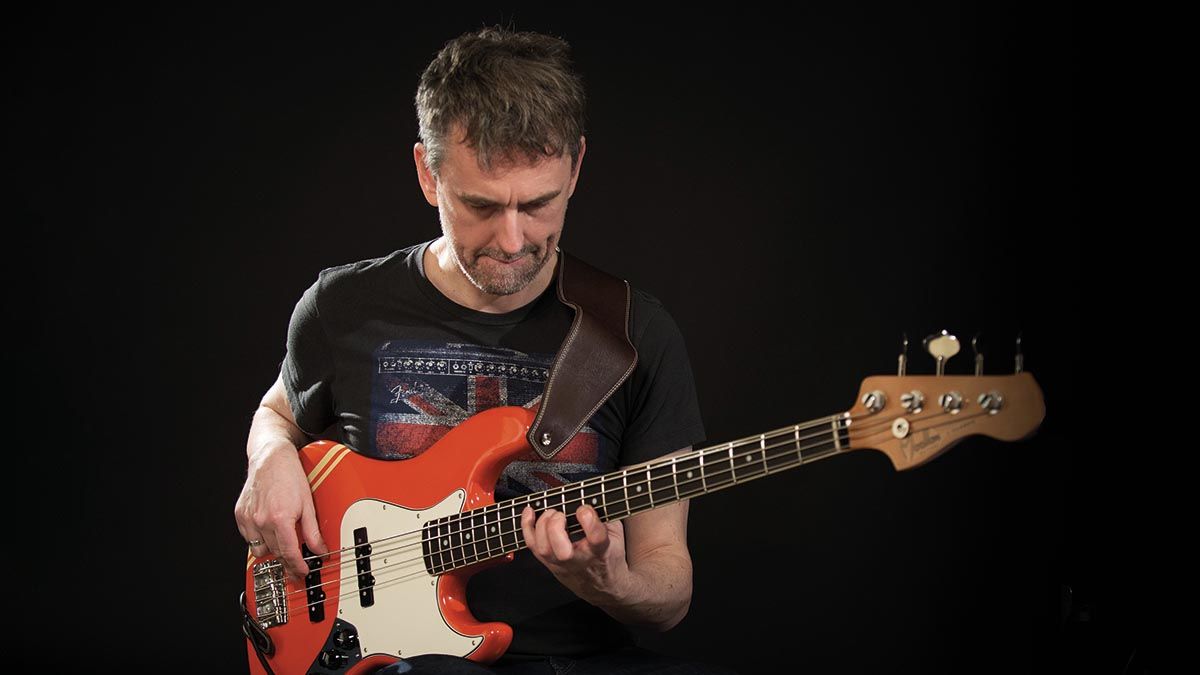 He also plays with jazz guitarist Scott Henderson as part of the Nomad Trio, and was a member of Planet X and the Virgil Donati Group for five years.

He can currently be seen in the acid-jazz/funk group Down To The Bone, a trio, BAD, and a flamenco group, and he has given masterclasses at the Musicians Institute, the Los Angeles Music Academy, and in Australia, in England, and Sweden.

Tell us about your bassist career, Rufus.

“I’m originally from London and moved to the US in 1999. I first went to New York in ’96, just to explore, and went to Fodera and met Matt Garrison there. I had just seen Matt play the week before with the Zawinul Syndicate, who were opening for John McLaughlin on a doubles tour they were doing.

“I was playing this Fodera, and Nick Epifani comes in and says, ‘You sound good, man. Where do you come from?’ I told him I was from London, and he was like, ‘Oh, you’re playing well! Have you met Matthew? and he introduces me to Matt Garrison.

“I said to him, ‘I saw you with Zawinul. You looked amazing. He said ‘Cool!’ and took me to jam sessions, where Richard Bona was playing.

A good time to move to New York.

“It really was. Richard was just taking off and becoming the next big thing. I came back in 1999, but I didn’t have any gigs, so I ended up working part-time. I befriended the owner of a bar around the corner in Hell’s Kitchen, and had my own residency with a band there.

“I used to go to Zinc Bar, which was a late-night hangout for musicians. I sat down on bass at the invitation of Latin jazz bassist John Benitez, and ended up playing with a line of guys who sat with us, including Roy Hargrove, Mark Whitfield and David Sanchez.

What was your big break?

“Word got around a bit and I met Randy Brecker’s wife, Ada Rovatti, and played a bit with his band Elephunk, then went to Ecuador with Randy and guitarist Vinnie Valentino, who plays with Vital Information. I started teaching at the Bass Collective, which was an amazing faculty at the time because John Patitucci was the director there. My first album session was with Buddy Williams and Jeff Golub, who were both very encouraging and complementary.

Tell us about Planet X.

“I was told that drummer Virgil Donati was looking for a bassist for his band Planet X in Los Angeles. I hadn’t heard them, but I was told that it was really difficult music. Later I played with their keyboardist Derek Sherinian on one of his albums, Mythology (2004), which also had Allan Holdsworth on it.

“Planet X’s music was very complex, but I was up for it and flew to Los Angeles. I was pretty fried after the flight, but 90 minutes after I arrived Virgil picked me up and took me to the audition. I had lost wood on the music, and it was crazy, because of all the different note groupings.

“Still, I passed the audition, because I had done my homework, and Virgil and Derek walked out of the room afterwards – then they came back and said, ‘Okay, you’re in. Welcome to Planet X! We will rehearse for nine days, then we will go to Italy and Poland. When can you be here?’ I was like, ‘I can be here in a week. It’s the fastest I can do. And that was it – I came back six days later with a suitcase and two basses.

How did you come to bass in the first place?

“Before playing bass, I was a really bad saxophonist. My school staff would bribe me not to practice, literally, because it was torture for them.

“They could hear it through the wall. Luckily I found a bass guitar sitting on the school theater stage, as the local rock band was rehearsing there – I think it was an SG type bass, in cherry red.

“I remember it wasn’t plugged in, but you know, the acoustic, metallic sound of the strings was very appealing. I love the saxophone, but it didn’t come naturally to me, and I felt an affinity with the bass. I knew right away it was for me, and within about two months I was so much better on bass than I was on sax.

Who were the bassists you admired at the time?

“For me it was level 42. The first time I heard The Chinese way on the radio, I couldn’t believe someone could play bass so fast in a pop song. The bass was very prominent, and it was just disconcerting. I couldn’t even begin to understand – it was unbelievable. After that I went to Japan, so I got into Tin Drum and Gentlemen Take Polaroids and Mick Karn’s bass. I admired Laurence Cottle a lot too.

You played a Wal from an early age.

“I got this bass when I was 18. I went to see Mahavishnu Orchestra play in London in 1984, and Jonas Hellborg was playing with them. I met Jonas at a bass event a few years later, and [Wal Basses founder] Ian Waller was there too. I was able to play Jonas’ double neck Wal on it, and that was the start of my love for these basses.

What other basses have you played on?

“Well my very first bass was a Burns Nu-Sonic and then I had an active Westone Thunder I. The Burns had a short little scale which was good at first as a kid I had small hands , and it was very easy to get around – but obviously it sounded awful.

“The first double-octave neck bass I got was an active Ibanez Roadstar II in sunburst tobacco, with a maple top and a big headstock, almost like an old Ken Smith. It was a great bass.

“Ibanez backed me up when I was with Planet X, actually – they built me ​​a five-string fretless. I still have it. It’s like the Gary Willis bass, but with a nicer wood – the mine has a burl maple top and a passive Nordstrand pickup.

“It’s an epoxy coated macassar ebony board – I specified everything. After that I played Ken Smith, and these days I play my Wal, Moollon and Xotic basses. I also use Trickfish amps and LaBella strings.

Name a bass part you are proud of.

“The Planet X record I played on, Quantum (2007) certainly has some cool tracks, and the album I made with [Tribal Tech drummer] Kirk Covington, Starship Cadillac, is also available for download on my website. This album is fun. It’s like Tribal Tech meets Weather Report and electronica. There’s a lot of fretless on this album. That would be good to hear.

People can buy video and PDF lessons on your website, right?

“Yes. You can also contact me there for private lessons on Skype or Zoom.

What is your fondest musical memory?

“Meeting Allan Holdsworth is one. I saw him play Baked Potato in Studio City before he died. We were both on Sherinian’s record, and a friend of mine said to him, ‘Oh, Allan, do you know Rufus? You are on a track together. Allan looks at me and says, ‘Oh yeah. Lots of notes… but all the right ones!’ It was the best quote ever.

The Riddle of Morgan Wallen – The New York Times