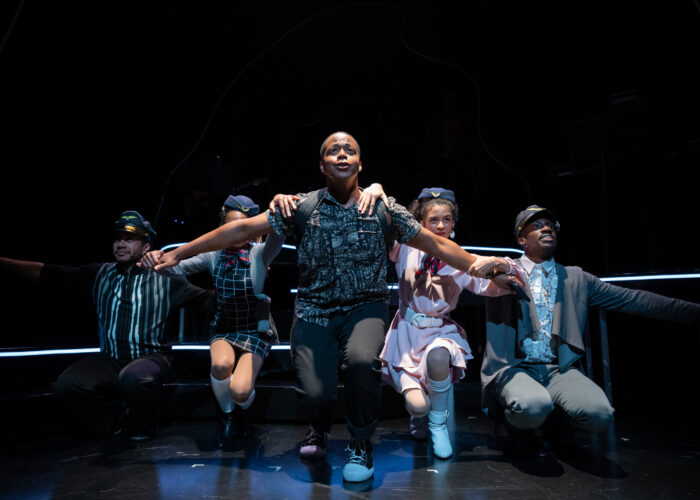 Review: Shotgun’s ‘Passing Strange’ is a magnificent meditation on artistic creation and growth

The young man from “Passing Strange” needs to get out of here. He can’t be himself with his mother’s giggling, normed middle-class mannerisms, or his church’s “Baptist fashion show,” or his teenage punk band, with their spirited performance but lukewarm commitment. their musicality worse.

Yes, the whole world – in this case, Europe and its sex, drugs and rock ‘n’ roll – is calling, and the youth (Devin Cunningham) must respond, as all children must eventually. And yet, leaving the nest doesn’t in itself make him a man or an artist, suggests this Tony Award-winning musical by the mononyms Stew and Heidi Rodewald. It also doesn’t quite resolve his American blackness. On another continent, with its death metal concerts and its arthouse cinema, its bohemian collectives, its cafes full of strollers and philosophers, the Youth can neither rid themselves of their race nor symbolize it for a short-term and sickening gain.

Now in a beautiful, liberating, and heartbreaking production from Shotgun Players that debuted Saturday, March 12, “Passing Strange” offers nothing less than a vision of what it’s like to be human. The Youth might protest to Mother (Rolanda D. Bell) that he didn’t choose to be different, that he didn’t choose to have quirky artistic dreams that don’t fit bourgeois Los Angeles and sunny. But neither did he choose the farm, the history, the race, the family, the identity. He must recognise, accommodate and reckon with all parts of himself if he is to be whole – and he does not have a lifetime to figure this out at leisure. Eventually, time is running out and forcing his hand.

Director William Hodgson tells this story with compassion and insight. He gives every beat, every discovery, every song the perfect amount of breath, which shows a deep and refreshing confidence in the script and the audience. The emotional peaks — when the youngster denounces the director of his church choir (Shakur Tolliver), when the youngster’s European lovers (Angel Adedokun, Chanel Tilghman) confront him for his hypocrisies — have the space to settle down and then move on. reverberate outwards.

Musical director Daniel Alley turns the in-depth, inventive, rock-focused score into a joyous theatre-wide call-and-response party. Alley and his three bandmates enjoy their playing so much that they frequently dissolve the fourth wall.

Each member of the seven-person cast excels, and Jasmine Milan Williams’ costume design extends the song they sing, making a teenage crush all the more swish, in her ruffled skirts, or highlighting Amsterdam as a dreamland in primary colors.

Tolliver, as a repressed choirmaster and Berlin steampunk artist who speaks like the last gasp of a flurry, has this electric superpower that makes everything on stage feel a little dangerous. Writhing like a snake on the floor or smoking majestically in a powder blue Volkswagen, he doesn’t just make choices; he seizes them, and you are also under their hold.

As the narrator, looking back with rue, mortification and empathy on his younger self, often from a platform a level or two above the rest of the set, Albert Hodge hits just the right person. He is a little harsh, a little instigator; it’s almost like he’s stuck running the circus of his youth like some sort of eternal purgatory. But despite all the resignation and shrewdness he projects, he still has the ability to be surprised by his younger self.

Then there’s Bell, whose mother is a quiet revelation, the product of a born performer who doesn’t need an amp to command the stage. Watch as the color drains from her face as she is on a long distance call with her son in Berlin, realizing how much more than geography separates them. Something else left her body, something you’d swear was tangible, as if she conjured up a shadowy figure and left the stage, leaving it behind.

In “Passing Strange”, the artist cannot simply hound the composition notebook, converting the muse into notes and words, like a hand-cranked machine. He can’t just soak up cool experiences like water for the mill and debate Marx and Hegel with European girls. His responsibilities must also be more earthly, more prosaic. Otherwise, he is not one of us, and his art cannot touch us, as “Passing Strange” so indelibly does.