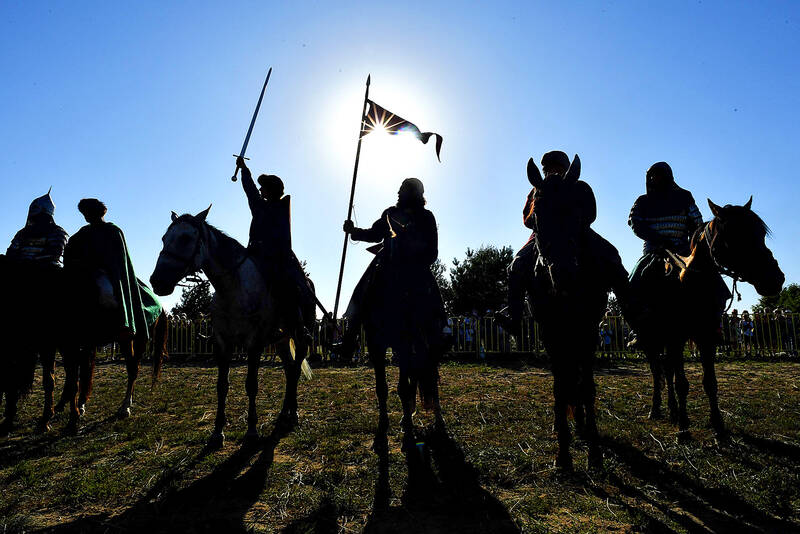 Re-enactments of battles in Russia more than history

Surrounded by dozens of men in chain mail and helmets playing dead in a field, an impersonator of medieval Russian prince Alexander Nevsky raises his sword and roars.

“This land is Russian, always has been and always will be!”

It was here, near Lake Peipus on the Russian-Estonian border, that eight centuries ago Nevsky repelled a force of Teutonic Knights who wanted to convert Russia to Catholicism.

Known as the Battle of the Ice because it took place largely on the frozen lake, the April 1242 clash is celebrated as a great victory against efforts to turn Russia away from Eastern Orthodox Christianity. .

For the hundreds of history buffs re-enacting the battle on a recent August day, that victory resonates especially today, as Russian forces wage a Kremlin-framed offensive in Ukraine amid a protracted conflict with the ‘West.

“We are fighting against Europe as our ancestors did,” says Oleg Yakontov, a 56-year-old retired paratrooper, clutching a sword and shield as sweat trickles down his face.

Historical re-enactments are a popular pastime in Russia, whether it’s medieval battles, Napoleonic-era clashes or the fierce fighting of World War II.

Drawing parallels with that history — and with President Vladimir Putin as a sort of successor to figures like Nevsky — is part of the message being pushed by the Kremlin and Russian state media in support of Moscow’s campaign in Ukraine.

“For me, Nevsky symbolizes the defense of the fatherland and victory,” says Vladislav Vasilyev, 23, still out of breath after taking part in the reenactment.

Several hundred people gathered for the mock battle near the lake, called Lake Chud in Russian. They feasted on grilled meat and listened to live rock music as the fighters battled each other on the field.

The event ended with demonstrations of mounted combat just meters from a large metal Nevsky sculpture inaugurated last September by Putin and Patriarch Kirill, the head of the Russian Orthodox Church.

“Alexander Nevsky’s personality was truly grandiose,” Putin said at the time, praising him as a “talented commander” and a “skillful diplomat.”

Part of Nevsky’s modern appeal for the Kremlin was his alliance with the great power of the time, the Mongol Empire and its Golden Horde, which had destroyed and seized many lands from Russia. For some in Russia, Nevsky’s acceptance of Mongol rule helped preserve the country’s religious traditions and Eurasian character in the face of Western expansionism.

“His main achievement is this civilizational choice,” says Igor Fomyn, a 52-year-old bearded Orthodox priest in a black cassock who came to watch the show.

“In making this choice, he put spirituality, his people and his homeland ahead of comfort,” he says.

Nevsky has been used in the past to stoke patriotic fervor, most notably in Sergei Eisenstein’s 1938 historical propaganda film Alexander Nevsky.

Made at a time of strained ties between the Soviet Union and Nazi Germany, the film portrays Nevsky as a heroic figure fighting against Teutonic rule. It features an epic re-enactment of the Battle of Lake Peipus with the heavily armored Crusaders crashing into the ice and drowning – a scene that many historians consider to be of dubious authenticity.

The film was pulled from theaters when the USSR and Germany signed a non-aggression pact in 1939, then allowed to return to screens when the Nazis invaded the Soviet Union in 1941.

Nevsky remains a cherished historical figure for many in Russia, and some here have little doubt who his modern counterpart would be.

“Our president continues his work, of course,” says Oleg Davydov, a 52-year-old engineer, present at the reconstitution.

“It’s about the defense of this country, its strength, its security.”

Comments will be moderated. Keep comments relevant to the article. Remarks containing abusive and obscene language, personal attacks of any kind or promotion will be removed and the user banned. The final decision will be at the discretion of the Taipei Times.