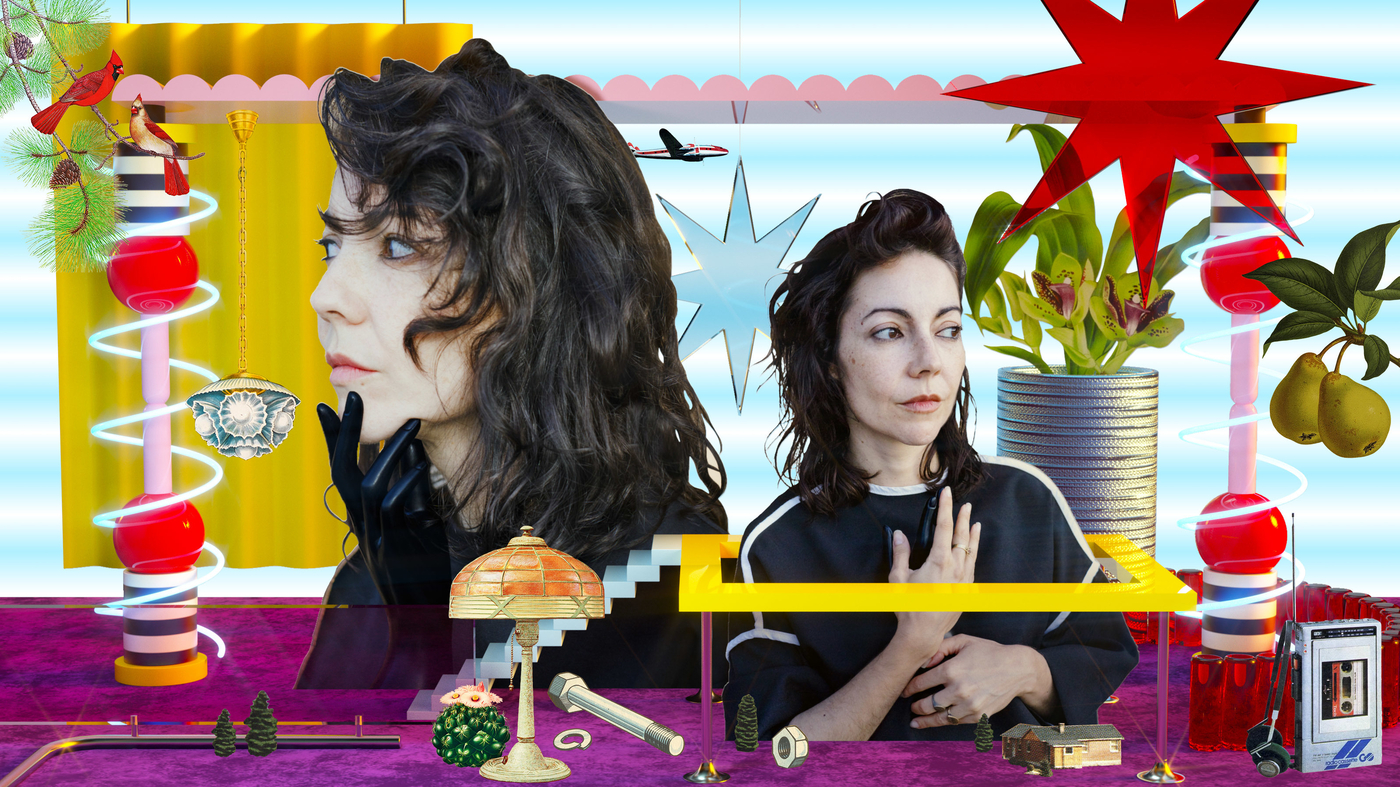 Lucrecia Dalt has become one of modern music’s most fascinating chameleons.

Lucrecia Dalt has become one of modern music’s most fascinating chameleons.

To celebrate Latinx Heritage Month, NPR Music is highlighting a series of artists across Latin America who are engaging with their musical heritage in unique ways. From reworking conservative genres for new eras to unraveling modern sounds from old-school instruments, these artists represent the wide range of experimentation that makes up contemporary Latin music.

Three months ago, experimental musician and songwriter Lucrecia Dalt was on the Spanish island of Mallorca licking a rock. She was shooting the clip for “No Tiempo”, the first single from her new album, ¡Ay!, playing the role of Preta, an alien newly landed on planet Earth. As Dalt explains in a video call, she was licking rock because Preta is able to feel stratigraphy with her tongue — in a way, she’s able to taste geologic history. At another point, Dalt dances weightlessly because Preta is “organless”, moving with slow-motion grace to a meandering bolero rhythm. Together, the images and the music evoke a sensual, surreal, sci-fi and decidedly romantic world.

Today, Dalt sits in her Berlin home studio, dressed in a cozy woolen cardigan, supported by a set of synthesizers, a gigantic bookshelf and a sinister sculpted white hand. She laughs at the absurdity of associating what she describes as the “tropical music” she grew up listening to in her native Colombia – bolero, salsa, merengue – with the album’s extraterrestrial narrative. “Sometimes I read the lyrics and I’m like, ‘God, this is so crazy,'” Dalt says. “Other times people ask me what the lyrics are. [all sung in Spanish] mean and I’m like, ‘Preta channels time through her glandular gate.’ It’s weird that I’m saying that in the context of a bolero song but, at the same time, it’s fair.”

Dalt has become one of modern music’s most fascinating chameleons. Across a string of albums released since 2005, the musician has occupied many forms, from creator of quirky indie pop (released under the moniker The Sound of Lucrecia) to purveyor of esoteric Colombian field recordings. A pair of records on Human Ear Music solidified a forward-electronic sound before his move to New York-based label RVNG Intl. prompted more reinvention – spoken word poetry on 2018 Anticlines2020s atmospheric horror No Era Solida. On ¡Ay!which translates to “Oh!”, Dalt recorded his most spectacular transformation to date: a lavishly arranged “bolero sci-fi” album, which fuses tropical music, jazz and electronics but which, specifies- she, is not a “fusion” record.

Dalt thought of ¡Ay! for many years. The Berlin-based musician summoned the “memory of rhythms” of her Colombian upbringing rather than precise, studied recreations. She began writing at the start of the pandemic in the spring of 2020, a period following some of the busiest months of her life. She had recently finished her work with an orchestra in Chicago, recorded a collaborative album with Aaron Dilloway of Wolf Eyes, and produced material for an art installation at the Museum of Modern Art in Medellín, Colombia, while recording and touring. No Era Solida. The musician was possessed by a “rash of wild, creative energy”, but when the virus hit she was forced to slow down. It was the right time, says Dalt, to pursue an album of tropical beats that would eventually require “very patient studio time.” Every day, the Colombian sat in front of her keyboard, listening, thinking and playing the music of her childhood. “I had more of that time for introspection,” she says. “I was slowly analyzing the tracks and thinking, ‘What’s going on with this progression? Why is it generating this feeling of nostalgia in me?’ “

Like so many people who felt homesick during the lockdown, Dalt sought solace in music from his past. “You look at these memories in a different way, through the lens of nostalgia,” Dalt says. “I was here, they were there.” The emotional thrust of the music of artists La Sonora Matancera, José A. Méndez and La Lupe entwined with Dalt’s memories of the place she most associated with music, her family home in Pereira, a town located in the Colombian mountains.

“The best way for me to describe it would be the memory of nice get-togethers at home with my uncles, the family reunion and the talks. The music was right there – very present,” says Dalt. His grandfather played maracas and sang; Dalt’s mother played the guitar. In a broader sense, she says, “Music was encouraged but not enforced…I always thought of it as something fun.”

You can hear a playful sensibility rising to the surface of ¡Ay!, not just in its delightfully absurd story of an outsider, but the arrangements themselves. On “Bochinche” (“The Mess” in English), amid shaking organ and a salsa beat performed by longtime collaborator Alex Lázaro, Dalt sings Preta the alien inhabiting a corporeal form, perhaps to be for the first time, “Oh how nice / Oh how awesome / One hand / In my hair.” As Dalt sings with poise and a wonderful sense of comedic timing, an animated trumpet played by Lina Allemano comes to life. “It was so funny to see this overly experimental jazz player making such a stupid melody,” jokes Dalt. “She makes funny faces while she does it and we enjoy it, of course.”

Although springing from a place of melancholy, the tone of ¡Ay! could hardly be considered sad. Often, it sounds like Dalt is having too much fun experimenting with the music, not only incorporating the metallic hits of his Prophet 6 synthesizer into downtempo South American beats, but stretching his vocals around traditional song structures. The melodies often fold in on themselves, like on “Dicen”, where Dalt relays the village rumors circulating about Preta. “She thinks she’s the Circe of Aeaea… / She crawls and licks it all,” Dalt sings as a mournful trumpet plays alongside her. When he arrives, the Colombian’s breathless exhale of the closing phrase, “So ‘dada’,” lands like a musical punchline.

While Dalt’s sound has changed profoundly, his lyrics repeatedly return to time, earth and the limits of human perception – hallmarks of his work for several years now. But where there was a clinical, almost scientific character in earlier reflections, as if Dalt occupied the space between her former profession as a geotechnical engineer and her current career as a musician, on ¡Ay!, his voice is altogether richer and full of blood. Even on “El Galatzó”, in which Dalt returns to speaking, the aural quality of the words seems just as important as their meaning. “Now I know how it feels / to have cubic miles of rippling water in my periphery / vision,” she recites as if performing a soliloquy, backed by Isabel Rößler’s flickering double bass.

Preta is the product of conversations with Miguel Prado, a UK-based philosopher, who Dalt befriended in 2021 on Twitter. “We ended up talking a bit about the consciousness of the idea,” says Dalt. “How limited our knowledge is, and even where it can be located. This idea triggered the existence of Preta as an entity of pure consciousness that cannot be contained within our human body.” For Dalt, the album’s alien protagonist represented an opportunity to expand the romantic and Latin genres she operates. “The music of the bolero, and all that [tropical] music is love,” she continues. “I was like, ‘Okay, maybe Preta can bring some kind of idea about love that’s more eternal. How can I play with that in a way that makes it feel like it’s still rooted in bolero romance without being overt? “

“Why not put these two unrelated things next to each other and see what happens?” Dalt questions these genres and these cosmic ideas. On the one hand, “science fiction looks outward but also inward,” says Dalt. On the other, the great emotions of the bolero – grief, compassion, intimacy and eroticism. The relationship between the two elements of ¡Ay! has only flourished since its recording, becoming even more “intertwined” during the development of the live show alongside choreographer Yalda Younes. As Dalt says with a laugh, seemingly thrilled to blur the lines between reality and performance, tradition and avant-garde, “Preta really got into bolero dancing.”