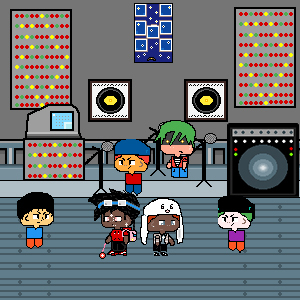 Co-creator Coolaidhippy got into music by watching TV shows, specifically cartoons. “A strong inspiration for the game comes from my music,” Cooly said. Coolaidhippy and Tethra64 started out in music individually before teaming up in 2017. The two discovered their unique sound and got to work. Together they create a variety of music like Hip-Hop, Blast, Trap and more.

“X2: The Next Power” is inspired by the experiences Teth and Cooly had in the music industry. Teth, the game’s co-creator, said, “The games had a huge influence on me and on Cooly’s life.”

Making a video game is a great achievement for Cooly. He would like to open a new community through what they are doing in Philadelphia. “I hope this gives everyone the courage to be like we can make a video game by being from Philadelphia and just being ourselves,” Cooly said.

Review: Shotgun’s ‘Passing Strange’ is a magnificent meditation on artistic creation and growth