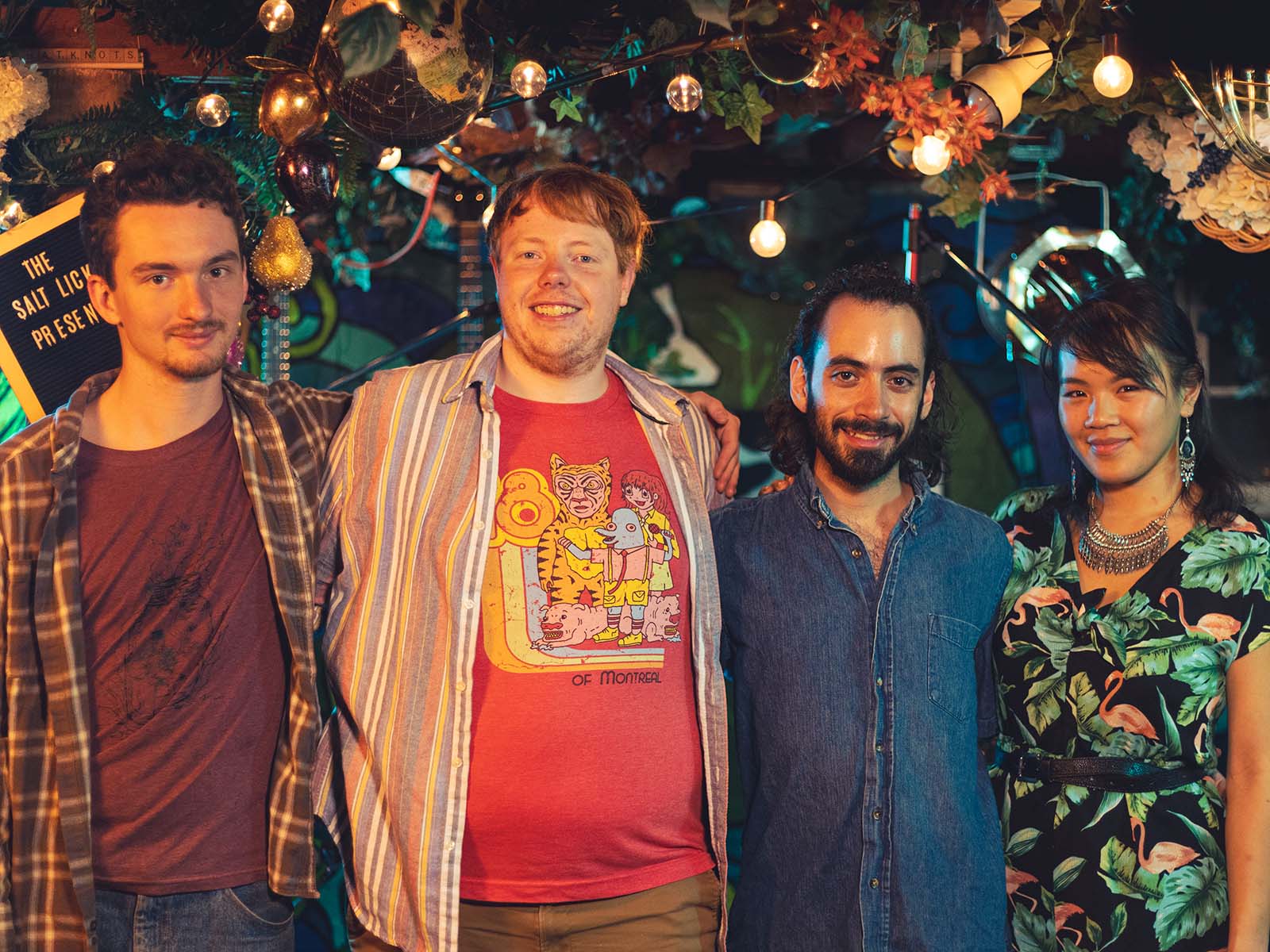 In music, there is a term for the force with which you bring the noise: “the attack”. By definition, attack describes the force with which a sound is initiated – something an artist can modify manually (think of the beat of a drum, versus the strike of a violin string) or by turning a knob. in the production studio. It’s something Denver’s dark-pop phenomenon N3ptune is proud.

“My settings on my attack are just different,” he said with a smirk. The 23-year-old (whose stage name is pronounced “Neptune”) doesn’t just speak of his powerful gospel-inspired voice that has delighted audiences for four years. He also refers to his drive to grow big and shake up the traditional business model while there – something he took charge of by launching a recording label.Atlantean Records LLC earlier this summer. The company was born out of the frustration of seeking outside support in Denver and seeing how other labels were running their business. â€œI don’t have time to wait for you if you’re not ready,â€ he said.

N3ptune, who grew up in Denver, plans to release all of their self-produced music through Atlantean. But he also hopes that the label, which is still in its infancy, can collaborate with younger artists and teach them production techniques. His efforts are part of a growing movement within the Denver music scene to better support burgeoning talent and attack the business side.

“The thing with the music industry is that nobody really knows what they’re doing, and nobody wants to talk about it, but they have a definite way of doing things. [in Los Angeles and New York]. And they have a formula, â€explains N3ptune. “There’s no formula out there [in Denver]. Here you can break the rules, start a business, say â€œI want to create a labelâ€. Boom. I can do whatever I want. ‘ It’s more collaborative here.

Before COVID-19 brutally brought the world to a halt, Colorado’s music scene was booming. Statewide, the industry accounted for $ 1.4 billion in annual revenue (Denver was responsible for about 840 million) and about 16,000 jobs in 2018. Despite the challenges of the pandemic, global revenues for the recorded music grew by seven percent in 2020, according to MusicWeek. Independent music labels and artists, who make up the bulk of Denver’s music scene, have dominated the market, collectively growing 27% annually and increasing their combined streaming market share to 31.5%. The majors, meanwhile, experienced a slight decline.

Kyle Hartman, co-founder of the local music agency Garden of the future, says he felt Denver on the precipice of a big city-like musical success. But Hartman was also increasingly frustrated that many artists he was passionate about never transcending the local level due to a lack of business resources or advice to do so.

â€œThere are these amazing artists who, they’re no less talented than these artists from LA or New York or Austin, but I just don’t think the infrastructure was here in Denver for them to reach. this higher level, â€he said. said. Hartman, who has worked on the Denver music scene for more than 10 years, having recently booked artists for artists such as Larimer Lounge and Underground Music Showcase, created the Future Garden agency in 2019 to fill that void. â€œMy goal is to build this infrastructure. I want the artists to start coming in denver to do it as an artist.

Future Garden now provides booking, management, advisory and public relations services, among others, and has since grown to represent nearly a dozen artists, including hypo-pop / cosmic jazz group Ramakhandra and the Ecuadorian electro-pop prodigy Neoma, who was scheduled to perform at South by Southwest in Austin, Texas, before the pandemic. The agency also recently added N3ptune to its list.

Some of Mile High City’s latest entrepreneurial music ventures also grew out of pandemic necessities. Denver Salt Lick, a collective launched in December 2020 by Jason Edelstein and Andrea Hoang, has started producing live music sessions called Songs From the Pond in the tiny, eclectic basement of their former Capitol Hill home. Shows served as an outlet for artists and music fans while live concerts were limited. Joined by their sound engineer Chris Voss and assistant cinematographer and engineer John Baldwin, the group also aimed to cultivate high-quality musical discovery, reminiscent of NPR Tiny Desk concerts and other popular studio session series. , which could pay off even after the live performances return. . â€œI think there are a lot of people who don’t realize how many bands are here,â€ Hoang said. “So it’s a way for them to hear it and see it, and hopefully make this conversion to go buy concert tickets to really go out there and support the bands.”

The ultimate goal, however, was to eventually launch an independent label to help bring this music to the attention of more people. Last September, the group officially announced Salt Lick Records, with its five inaugural artists, including Bears and beasts and Mrs.

Typically, national record companies lend artists a large amount of money up front to create a record, and continue to take 80 percent of the revenue. Salt Lick does not rely on such predatory income models. Instead, Edelstein and Hoang forgo contractual requirements, like the advance loan and structural agreements with the city’s sound engineers so artists can use their studios, including the Salt Lick basement, and their staff. services at a reduced rate. â€œThe barrier to entry is not that high because there isn’t that feeling of, the artist is taking a big loan and they’re going to owe us for years,â€ Hoang said.

Edelstein and Hoang note that they are slowly generating profits. They are yet to hold full-time jobs other than Salt Lick for now, but they envision the label being fully sustainable for years to come.

Hartman and fellow Future Garden director Kori Hazel also do not currently earn a salary from their work with Future Garden, citing artists’ career growth as their main focus. Hazel says that if an artist or a group they represent signed with a national agency or label, they would consider it a victory. He and Hartman simply hope to serve as a bridge for these artists at the incubation level, helping them develop their craft and focus on art with a ‘quality over quantity’ mindset. As Hazel sees it, there is a pressure to perform economically once you hit the national level – and he’s noticed that “art crumbles” as soon as people rush to sign with agencies in markets. bigger ones like Los Angeles.

â€œWhen you’re at a big agency you understand that you’re also a number on a huge roster with a bunch of other national artists, and that’s not the same kind of attention,â€ says Hazel. “And [the national agencies] can help you, but I don’t believe they can help you in the same way as someone who cares for a very localized sense [can]. “

Part of that appeal seems to lie in the ecosystem that creators like N3ptune, Salt Lick, and Future Garden are building, in particular, as Hartman and Hazel note, music originating in Denver continues to push boundaries and change genres. â€œI see us as creators of taste. Those [national] agencies, they are not leading the trends. They catch successful artists. They don’t set the agenda, â€says Hartman.

â€œThey don’t change the culture,â€ adds Hazel. â€œWe meet culture where it is. We also try to push him “

It also doesn’t hurt that Denver’s art scene has built a unique collaborative culture. â€œWe’re in partnership with all of those people that, in any other music scene, you would compete with. And instead, we ask ourselves, “How can we help you do this thing?” How can we build this music scene together? ‘ “Edelstein says. All three groups agree that an uplifting sense of community is a critical part of the city’s recipe for success.

â€œThere is literally a renaissance that we are witnessing before our eyes, in terms of entertainment, in terms of institutions. â€¦ We all feel it, â€says N3ptune. “As I walk into the business, I see it, I feel it, and I’m already there.” As for the Denverites on the other side of the compound, all you have to do is be sure to listen to their attack.