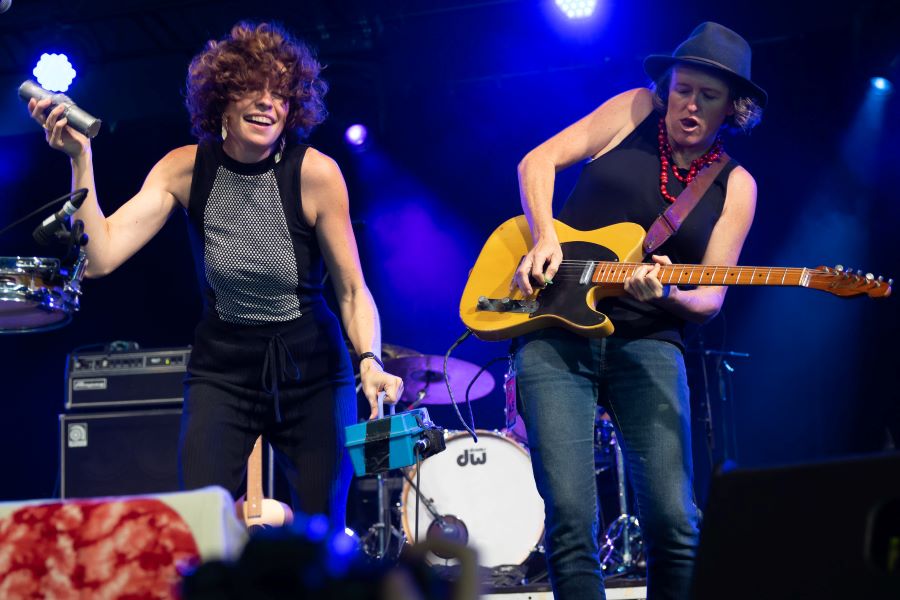 Hussy Hicks are one of the hardest working bands. And one of the most entertaining. With amazing guitar work from Julz Parker and the dynamics Leesa Gentz on lead vocals, their indie root n blues act is always outstanding.

It’s fair to say that 2022 has been a tough year for them. Their home on the northern rivers succumbed to “once-in-100-year floods” and, like so many others, life was turned upside down. Creatively though, they kept plowing.

Today they release their latest EP, with the title “Surrender”. Plus, as if that wasn’t enough, they’ve released a game, available on IOS and Android, that lets you play all three tracks from the EP, with each track having its own game. They’ve enlisted their family and to their friends to help them set it up, and I must say the games are quite addictive.

I caught up with Julz to chat about “Surrender”, the app and how they handled the trials and tribulations of 2022. They also have an upcoming tour – dates are below.

Hi Julz! There’s so much going on with Hussy Hicks right now. You release your latest song, “Surrender”, and you release an app for IOS and Android, which has a game for this new track, and your previous song, “Same Boat”. How were the games and the application born?

It’s actually been a very slow burn – james clark (Monkey Noise – app makers) was one of my brother’s best friends at school and we had talked about it a bit over the years as something we wanted to do but didn’t really have the skills. We had just finished recording “Same Boat” and Leesa’s nephew said he thought it was a winner so we thought he needed a clip. Movie clips as a band can be a bit punishing and “Same Boat” being such a fun song, I thought it might be the perfect track for the “interactive/game movie clip” idea. I spoke to James again and this time he said he thought he could probably do it. In the same way Jordan Barrington (another childhood friend) they set about making the game. We had the rest of the EP recorded (but not mixed) and the boys asked if we wanted to try another game…and then another …. Then the app thing happened – they got Luca Marán involved and we ended up with a fully playable EP – it also has the option for us to exclusively share some weird demos and recordings etc. for a while on the music player. So it’s gonna be fun.

Can you tell us a bit about the track?

It’s a little indi rock track with a fun guitar riff and lots of harmonies. Kind of a social commentary on the fact that people are seemingly herded into camps where they find ultimate confidence in the black or white side of something and the nuance of the gray area is forgotten.

I believe the game for “Surrender” has a “choose your own adventure” theme. Can you give us an overview of what to look for?

I think the idea of ​​the game was a real “keep it simple but interesting” approach. We have a fairly wide age range of supporters and some of the less game-minded found ‘Same Boat’ a bit difficult to ‘win’ over. Surrender is just totally simple – choose this or that…. And watch the world unfold. It’s also mega cute and features cameos from my dad and Minnie Marks as well as members of my brother’s band Electrik Lemonade.

Who in the group is the queen of gaming?

Hard to say…none of us are hardcore players, but we try hard. I’m a big fan of Mario-era games and think I could take everyone else to the kart in a pinch (that said, Ali is a dark horse – we have battles going on at chess.com)

I played the game for “Same Boat” – it took me back to my youth. Have you had a lot of engagement from the gaming community as a result?

It definitely engaged a different demographic of our subscribers – there were some intense ranking battles over the weeks of release. blues musician Julian James was pretty tough to top – I think I held the top 5 for a while. But yeah, it was super interesting to see who really dived. People thought it was the coolest thing ever – or didn’t get it at all – anyone with any gaming experience was quick to jump on board.

What else can we expect to find in the app in the future?

We create so much music that doesn’t end up getting published, so having the app with an integrated music player means we have a place where we can share things that don’t necessarily end up on streaming sites. It’s kind of like our studio, so I guess it’ll be like a little window into the creative world we have there. Also, it could become a great place to first launch ticket sales for intimate shows, etc.

The game for “Same Boat” puts you in a lifeboat, much like what you experienced earlier this year during the tragic flooding of northern rivers. I can’t imagine how traumatic that must have been. Your house and your home studio have been ravaged. How is the repair/reconstruction going?

It’s almost exactly 6 months after the big flood and it’s crazy how many people are still a long way from getting back to normal. I don’t think anyone without driving through the area in March/April can truly comprehend the extent of the devastation that the whole town of Lismore and surrounding areas has suffered. So many people have made it this winter with 2 power outlets and no interior walls, dealing with banking and insurance uncertainties etc. Even if you are able to get craftsmen, which are so hard to find, the wait times for materials have all skyrocketed in price.

We have been very lucky to be very visible through what we do and usually with a disaster of this magnitude people want to help. So many friends and family and even strangers came to our aid during the clean up phase and we were lucky enough to be able to come in and keep the fire and the industrial fans and dehumidifiers running which allowed us to save a large part of our interior walls. etc Just before we left the country for our European tour, the space had again become a habitable starting place. It was good to be at a stage where we could lock ourselves in and go overseas.

We still have a long way to go and the rebuilding of the studio hasn’t started yet, but I feel like we’ll get a boost after the time has passed. I feel truly blessed to have such a wonderful community around us – it was definitely a traumatic time.

I enjoyed watching your travels on the ‘gram. Turkey, France, United Kingdom. I expect this to be a great tonic for both of you. What were some of the highlights?

Just being surrounded by different cultures again was a highlight. All the different foods, attitudes, dinner times, etc.

We also have lots of friends here who are a big part of our chosen family, so being able to reconnect has been incredibly good for the soul.

What’s the best way for fans to contact you, connect, and provide feedback on their gaming experience?

Come to a show – we’re always ready to chat. Otherwise, we are quite available through all social media channels and through our website.

Hearing people talk about their experience with the “Same Boat” game has definitely been a nice bonus for the release so far.

When will we see you on the road again in Australia?

We come back and take the way back. The “Same Boat” EP launch tour is happening everywhere – October to November to start and we’ll try to cover anywhere else we haven’t been in early 2023. We love being on the road and there is a lot of lost time to make up for.

Keep an eye on them website for the new dates

More to explore on the AU: