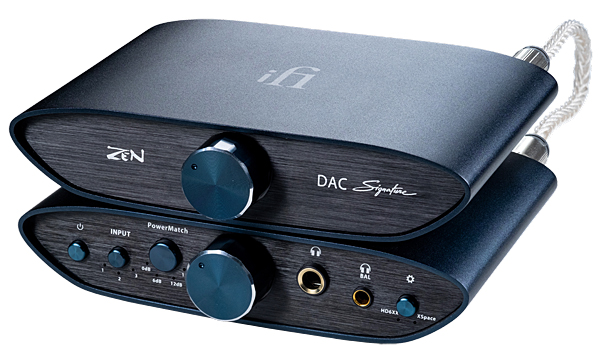 Itâ€™s been a while since Iâ€™d been serious, critical listening through headphones. That changed when publisher Jim Austin asked if I wanted to review the iFi Audio ZEN Signature Set ($ 599). Thinking that I could use more Zen in my life, I agreed.

British company iFi Audio, which operates under the auspices of Abbington Global Group, has launched several compact products in its ZEN series: DACs, headphone amps, a Bluetooth receiver and a network streamer.

Owners of other brands of headphones, don’t worry: ZEN CAN Signature amplifiers are intended for use with a wide range of headphones; everything except the custom equalizer curve is still applicable.

Design and configuration
I have been told that the smooth, flattened stones by the river inspired the design of the ZEN components. Despite their near-ovoid shape, they’re designed to stack, with tiny rubber feet providing assistance. The soft curves and black, textured and slightly recessed facades of the ZEN units contrast with their deep blue matte finish. Their shape is retro-modern, slightly Space Age ?? although they are too trapezoidal to resemble flying saucers.

The front panel of the ZEN DAC Signature V2 is minimal, with a single (undoable) volume button in the center. Behind the dial, a discreet LED changes color to indicate the audio format and the sampling frequency of the signal received by the DAC: white for PCM 88.2 kHz to 384 kHz, red for DSD 256, green for MQA, etc.

The rear panel has a rocker switch for fixed or variable volume. The digital input is asynchronous USB Type B, USB 3.0 (2.0 compatible). Analog outputs include a single balanced 4.4mm Pentaconn connection and an unbalanced RCA pair. There is no on / off switch; if you want it completely, unplug it.

The ZEN CAN Signature headphone amplifier has the same analog volume adjustment dial as the DAC Sig V2, based on the same TOCOS potentiometer. Also on the front are small push buttons for power on / off, input switching, gain levels (0dB, 6dB, 12dB, 18dB) and activation of the iFi XSpace function. , which aims to broaden the perception of space and bring the music out of your conduct. The same button turns the equalizer curve optimized for the HD 6XX (or HD 650) or HiFiMan HE4XX headphones on and off, depending on the kit you purchase.

A few cables are included with the Signature Set: an interconnect with USB Type A to Type B, which I used to connect my laptop, a pair of respectable quality RCA-to-RCA interconnects, and a 4.4mm -Ã -4.4 symmetrical Pentaconn mm cable to connect the DAC V2 with the CAN amplifier in the symmetrical configuration recommended by iFi. The DAC and CAN each come with a 5V DC power supply, a more attractive design than the “wall wart” suggests.

There is no Bluetooth. I haven’t missed it.

Used
I played music mainly through Roon (version 1.8, build 831), both from stored files (downloads; CD rips) and streaming from Qobuz and Tidal. My MacBook Air (M1, 2020) served as the Roon Core.

The installation was simple, almost plug and play ?? unless you are using a Windows computer as the source, in which case you need to download and install the drivers for the DAC. It’s easy; drivers and firmware updates are available on the iFi website.

In the settings of Roon, I added the iFi ZEN as “CoreAudio”. Under Settings> Audio, the specific device was not identified but was listed as â€œUSB HD iFi Audio (by AMR)â€. I selected “Decoder and renderer” as the MQA capabilities, because the Signature V2 DAC can handle full MQA decoding and playback. Because I am on a Mac, I have set the DSD reading policy to “Convert to PCM” as recent versions of Mac OS unfortunately do not support native DSD. ZEN gear worked perfectly with Roon.

A sensitive question
iFi sells these specific components – the DAC and the amplifier – together, to be used with a third specific component: these specific HiFiMan or Sennheiser headphones. And yet early in my hearing, using them precisely this way (and also with similarly specified “phones”), I found the output levels to be high for comfortable listening with the settings of. Recommended volume control: TOCOS, which makes the potentiometer used to control the volume in the amplifier (and also in the DAC), recommend using it at 11 o’clock or more for optimal channel matching ?? a fact clearly displayed on the iFi website. In addition, a notice in the package stated that “at normal listening levels the volume control should be around the 12 o’clock position”. With the headphones I have used, including the headphones specifically recommended as partners for these amplifiers, I found myself listening with the volume control at 10 o’clock or less; if it got much louder i started to find the volume uncomfortably noisy.

In addition, the iFi site contains a headphone calculator, which lets you choose an amp and pair of headphones and determine if they match (in terms of gain and sensitivity). By doing this exercise with the two versions of ZEN CAN and their intended headphones, the computer told me that, connected directly, without attenuation, they are not a good match: the volume would be too loud ?? unless you add another iFi device, the iEMatch, an in-line attenuator used between the amplifier and headphones. The iEMatch costs $ 49; two other versions, the iEMatch + (which can switch between unbalanced and balanced operation) and the iEMatch 2.5 (which has 2.5mm balanced connections) each cost $ 59. Neither is included in the ZEN DAC / CAN package.

I noticed the iEMatch while exploring the iFi site and asked iFi to send me one. They did, and after that ?? with the iEMatch online ?? no more problems with too much gain.

Why, when two components are sold together, intended for use with a specific third component, is an attenuator required for it to work that way? I do not know. But what if you are considering purchasing one of the ZEN Signature combos? and if not, is it a decent and affordable headphone setup? you may want to add an iEMatch to your order.

Listen
The Signature Set ZEN DAC V2 and ZEN CAN headphone amps pack a punch, with high resolution, output and impact. At least for the requirements of the headphones I was using ADC is a powerful amplifier.

CAN easily drove the four headphones I tried: HiFiMan HE400S and Drop + (formerly MassDrop) HiFiMan HE4XX, Sennheiser HD 650 and the Sonus Faber Pryma 0 | 1. I focused most of my critical listening on the first three, as they best matched the two ZEN CAN amps.

Product information indicates that activating the Signature HFM ADC’s equalizer “further improves the texture of the deep bass and injects more immediacy into the upper mids.” The curve is also said to help smooth out uneven treble peaks. What I heard were sharper transient attacks, more air and presence. I also heard more detail and clarity. And yes, the EQ curve obviously amplifies the bass.

Faster Than Sound: A Year’s Headlines in Limbo: A Flurry of Industry Activity in an Intermittent Reopening Scene – Music