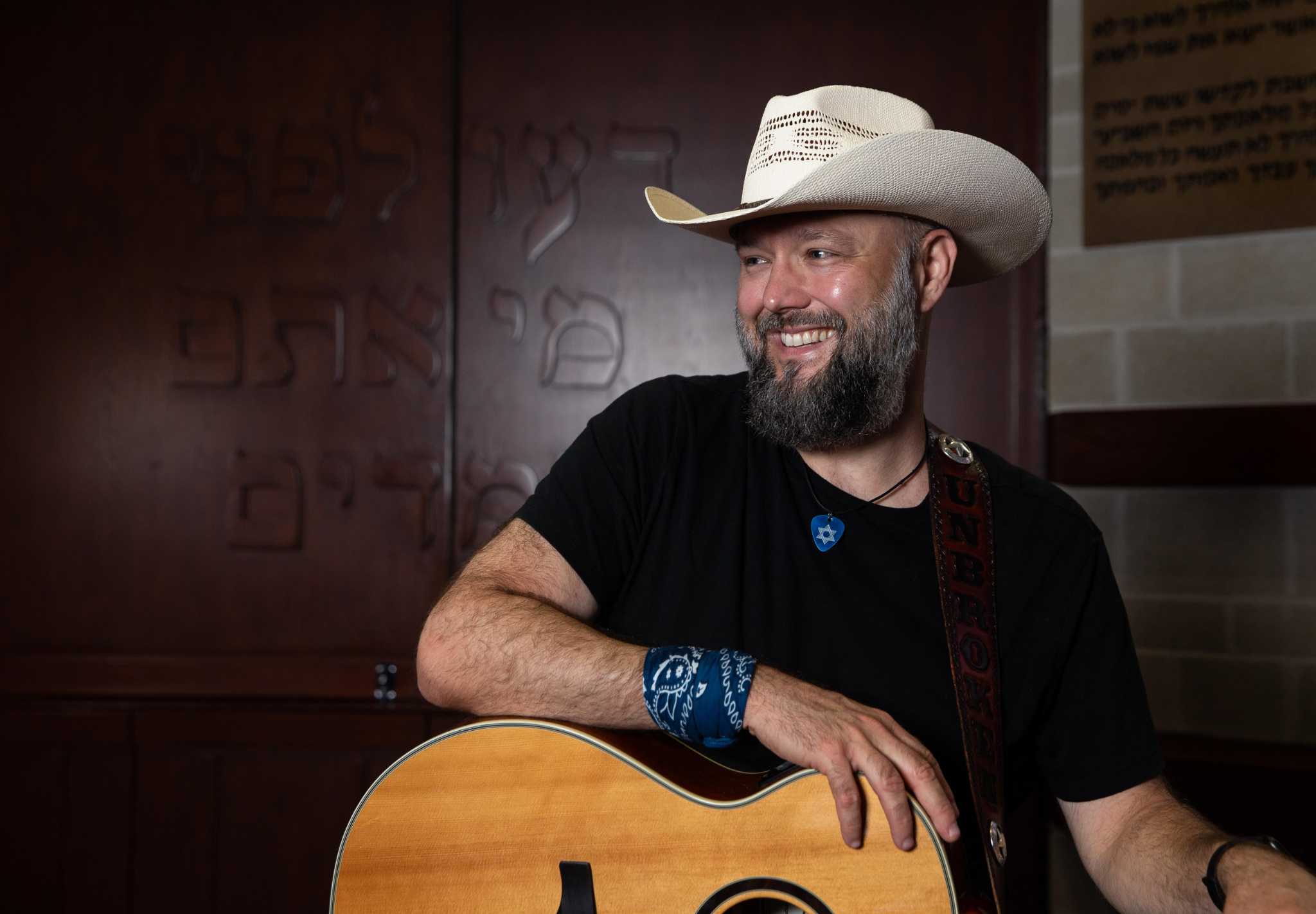 Joe Buchanan may be wearing a cowboy hat instead of a yarmulke, but make no mistake: this Houstonian uses music to share Jewish values ​​and history.

He takes to the stage in synagogues across the country – and during the pandemic has created an online “Tableside Shabbat”. No matter the venue, Buchanan wants his tracks to entertain and inform.

“The world as a whole still doesn’t really know what it is to be Jewish,” he said.

And he wants to change that through song. After all, that’s how he learned the faith himself. Buchanan converted to Judaism nine years ago.

It’s truly a love story, he said, from when his future wife, April, stumbled across the game store where he worked in her twenties.

It was a slow day at the store. “We didn’t have a lot of customers,” Buchanan said. “So I played him a song on my guitar.

“We ended up getting married pretty quickly.”

Religion was not a concern. April was not religious and although Buchanan had grown up a Christian, he had never found a church that suited him. He was always looking for a congregation that matched what he had learned as a child from his grandfather.

“He taught me when I was young that God is simple, that you can see God all around you, and your goal is to live a good life,” Buchanan said. “That made sense.”

But he had trouble finding a church that preached the same message. He tried various faiths, going to church with his friends on Sundays.

It wasn’t until years later, as a married man, that he decided to try again. He asked April to go out with him and look for a church house.

Buchanan couldn’t help but notice, however, that she didn’t sing any of the hymns or really participate during the services. When he asked why, she replied, “That’s not my thing.”

It wasn’t until 13 years into the marriage that Buchanan really understood.

The couple visited the Holocaust Museum in Washington, DC, and were shocked by what they saw.

April turned to him and said, “I want to connect with the faith of my people. I am Jewish – and our son is Jewish.

Buchanan explained that he didn’t know because April didn’t practice and didn’t know much about his own faith. But she wanted to change all that, and this time Buchanan would be the one to follow the ride. He told April, “If you want to explore this together, let’s do it.”

The couple searched for a synagogue near their home and found Congregation Shaar Hashalom in Clear Lake. On their first trip to check it out with their 11-year-old son, Nathan, they met Rabbi Stuart Federow.

“We showed up,” Buchanan recalled. “I said, ‘They’re Jewish, and I’m not, and none of us know what that means.'”

Federow greeted them by explaining, “There is only one God, and there is nothing wrong with you. You are loved by God just as you are. Then he added: “We don’t know what will come next, but what matters is now. You do good not for fear of punishment. You do it to bring more good into the world.

The words immediately resonated with Buchanan.

“It brought me back, like hearing my grandfather again,” he said. “I dove into it.”

Buchanan decided to convert to Judaism and began writing songs on his guitar about the process to help him better understand the concepts and stories of his new religion.

When Federow discovered that Buchanan was playing music about Jewish prayers and his Torah studies, he encouraged him. Eventually he invited her to perform during the Shabbat service.

Word spread, and other synagogues asked the singer-songwriter to come forward.

“I was asked to go to communities and different congregations,” Buchanan said. “April and I sat down. I knew it was something important, but I didn’t know what to do. What do I have to offer?

Around this time, Federow sent him to a Jewish songwriting conference. At first, Buchanan was a wallflower, but then she was asked to join a song circle. Everyone was playing music and singing.

Kaye loved his music and offered to help Buchanan make his debut album, “Unbroken,” released in 2015.

With the recording, everything took shape. Buchanan began to consider a program where he would share his story on the road.

He developed an entire weekend at a synagogue – providing music for Friday night Shabbat services, a concert and workshops.

“I never wanted to step on the bimah, play the tunes and then roll,” he said. “I wanted to know people. (The bimah is the raised platform at the front of a synagogue where the Torah is read.)

Buchanan established an artist-in-residence program and launched a workshop called “Choosing to be Chosen”.

Before the pandemic, Buchanan was on the road three weekends a month, touring full-time as a Jewish country artist. He describes his music as “feel-good, rowdy Americana with a Jewish soul.”

Then the pandemic hit.

“I thought to myself, ‘I can hang lights and play on my laptop. Let’s start running services on Facebook.’ I didn’t know if anyone would show up.

He called the session “Tableside Shabbat.”

There were prayers and songs, Buchanan said. He also made sure to respond to discussions with the audience and keep the session interactive.

“Now we have people across the country and across the pond playing it in their living rooms,” he said. “The same people started coming every week – then more and more people showed up.”

Missouri City resident Michael Burger first saw Buchanan perform at Congregation Beth Yeshurun. “It’s not your normal Jewish music,” he said. “It was something new – and I just connected with it.”

When Burger heard about “Tableside Shabbat,” he marked his calendar. “It became something we did every Friday night,” he said. “A little community formed from that.”

The sessions have become a source of comfort during the pandemic, he said.

“I found his services to be this oasis in the midst of COVID,” she said. “It was this incredibly comforting place you could go to at the end of the week.”

Ducharme discovered Buchanan after his daughter Greta Bolton suffered a stroke and was quickly rushed to hospital.

Buchanan rewrote a song just for Bolton and called it “Greta’s Song”.

“We were all in tears,” Ducharme said.

Now, even as COVID restrictions are lifted, Buchanan continues to offer “Tableside Shabbat” whenever possible — and Ducharme is staying tuned.

Judaism offered him a lifeline, a lifeline that gave him more meaning and purpose.

All religions should work together as a positive force, he said.

“Music should be a bridge, never a wall.”

The Hebrew word ‘Kavanah’, described as the state of mind of Jewish prayer, literally means ‘intention’ or following the ‘direction of the heart’.

And that’s what Buchanan said he wanted to do, play Jewish music from his heart — with a Texas accent.

Peyton is a freelance writer based in Houston.