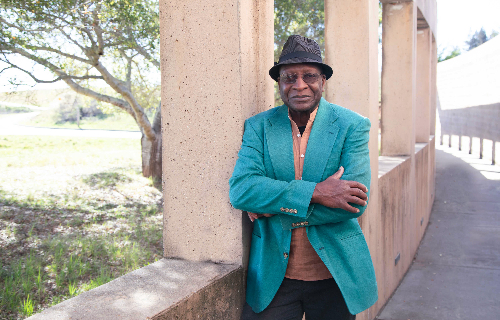 Music teacher Karlton Hester has mixed feelings about Black History Month. For the composer, saxophonist and flautist, it’s important, but one month is not enough.

The focus should be on black history year-round, as well as women’s history, Latinx history and the history of other indigenous groups, he said. All have been neglected for too long.

“The truth is there’s a lot of other things happening on the planet outside of the colonial perspective – a lot of important things,” he said.

All people of all ethnicities should have access to this wider field of knowledge, he said.

“Let everyone benefit from diversity, equity and inclusion,” he said.

Hester was recently named the first Associate Dean for Diversity, Equity, and Inclusion in the Arts for UC Santa Cruz’s Arts Division. He said the job is a good fit.

“That’s basically what I’ve been doing all my life anyway,” he said.

In his research, he discovered that the one thing that has historically stood in the way of the development of African American music and culture is the lack of equity, diversity, and inclusion.

“When that’s removed, the result is different,” he said.

He points out that jazz works in a democratic way. In the practice of African-American jazz, each musician contributes equally to the creation of musical canvases, regardless of their particular instrument.

In contrast, he said, the colonial perspective is that whoever has the biggest guns and is the strongest will get what they want.

Hester grew up in a music-loving family in El Paso, Texas, where he started playing the piano at age 2. He started by mimicking the R&B songs he knew from artists like Fats Domino and Little Richard, and by the age of 4 he was picking up the piano. Classes. A few years later, he sang in the El Paso Boys’ Choir. The choir gave him a rich education in the classical tradition, with lessons in music theory and experiences with professional groups, including symphony orchestra, ballet and orchestra. In 6and year he began to learn the flute and other wind instruments. Outside of school, he took every opportunity to learn from the masters of African-American music.

He says he has always loved all types of music.

He studied music at the University of Texas, then headed to Southern California, where he got a job as a music teacher. Hester earned a doctorate in music composition from the City University of New York and taught for a decade at Cornell University. Eventually tired of the snow that could last from October to June, he returned to milder California to take up his post at UC Santa Cruz.

“I usually tell people to listen to my music if you want to understand me,” he said.

He adapts his compositions to suit his reactions to environments depending on where he is at the time. When he lived in Seattle, he explained, it was slow compared to San Francisco, so he created more intense music. New York was intense, so he created soft music when he lived there, he said.

At UC Santa Cruz, he is director of the Digital Arts and New Media program, which brings together all digital arts.

“At 21st century, most traditional arts have a digital component,” he explained.

Hester has been working with electronic music and sequencing for decades, especially to supplement his compositions when he hasn’t had access to enough live musicians.

“I’ve always been into multi-layered music,” he said. “When you don’t have enough musicians, you still want to hear the sound.”

He developed his own style of music which he named Hesterian Musicism. He was inspired by masters like John Coltrane, Miles Davis and Duke Ellington, who all invented their own vocabulary.

“I started thinking about my own skills, chords, timbre and texture, and I did it systematically,” he said, adding that Hesterian musicism grew out of that research. Hester’s music is inspired by her spiritual practice, which is part of an “omniversal” perspective. He believes that nature is his best teacher and that everything is interconnected.

“It means using your environment to understand how things are going,” he said. One of his recent compositions, titled Quantam Elder Consciousness Vaccine, aims to “demonstrate the unbroken connection of vibrational consciousness that exists between the molecular, spiritual and intellectual intersections of the Earth that link to the Ominverse”. Hester believes humanity as a whole would benefit from more attention paid to traditional knowledge, from knowledge of rainforest herbs to democratic principles used at powwows. A greater focus on black history and Indigenous history means a healthier society for all, he said.

During the quarantine, the number of long-term online direct lenders has increased