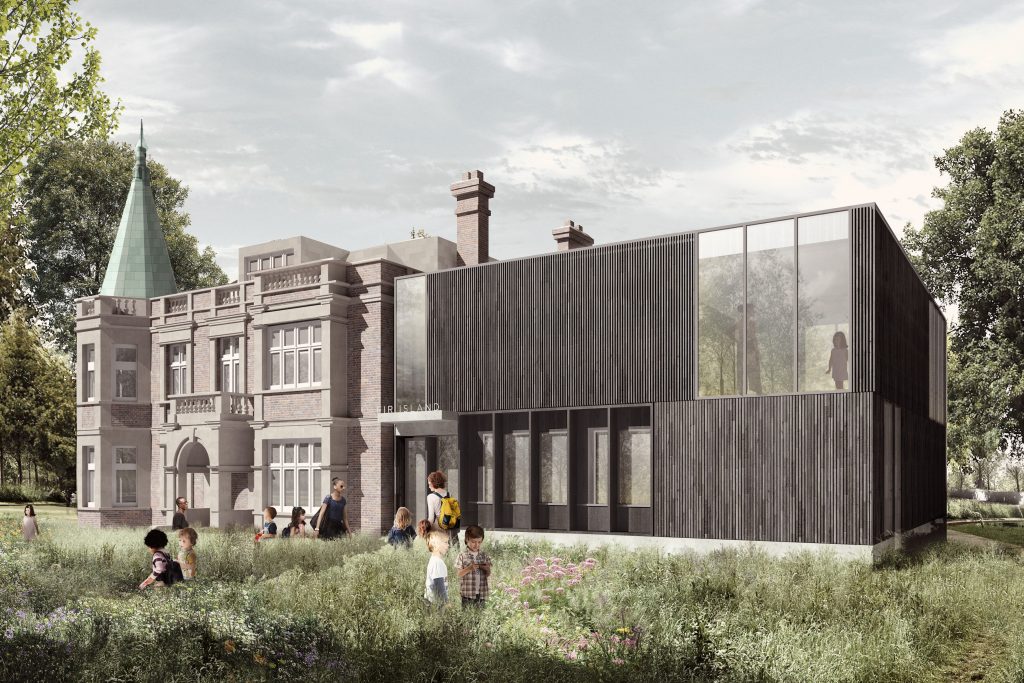 The project on the semi-rural fringe of suburban Mill Hill will add a black timber clad extension to the original locally listed house, which had been divided into apartments. The house will be preserved and renovated.

The 100-bed nursery sits on the doorstep of a growing number of new housing developments in the area, including dMFK and the HawkinsBrown-designed development of the former National Institute of Medical Research.

The architect said he undertook a series of pre-bid consultations with Barnet council about the project, which resulted in a “very compact plan, significantly reducing the footprint of the proposed extension” .

Practice Director Ben Gibson said: “This is our first foray into nursery design and I hope it won’t be our last. Children need wide open spaces to grow and learn, supported by beautiful surroundings and materials.

“We particularly appreciated the mix of urban and rural context for this project and the means that can impact an architectural response.”

A future time scale is not yet known.

The site sits on the threshold of urban and rural conditions, simultaneously served by the Northern Line and with views over the scenic Totteridge countryside. The language of the proposed extension building can be seen as a synthesis of these conditions. A formal, urban fenestration pattern is articulated in the blackened wood we observed in the rural barns around the site and in Hertfordshire.

The existing building fell into a state of disrepair after many years of ad hoc maintenance, and the interior layout was ill-suited to create a series of apartments following the original use as a single dwelling. The proposals in the planning application file include the repair and renovation of the existing masonry and windows, as well as the opening of the interior layout to create children’s rooms with triple exposure.

Four crèche rooms (infant, pre-toddler, toddler and preschool) are contained within the building, along with the entrance, kitchen, washrooms and staff facilities. The existing building is organized over four floors, including a basement, with staff facilities located on the third floor and nursery areas on the ground and first floors, which are shared with the extension of two floors.

A large garden has existed since the original mansion, with mature planting and trees along the perimeter, which would create a sheltered place for children in the nursery to experience nature. This garden is proposed to become an outdoor play space, with landscape architect Studio ONB offering a number of activities to encourage learning through play, such as woodland play paths, a soaking pond, musical games with outdoor instruments and outdoor classrooms.

The proposals come against the backdrop of a number of large housing developments, with 460 new homes being built on the site of the former National Institute of Medical Research, which sits right next to the site of the proposed nursery, and hundreds more built or under construction. built on the Millbrook site less than 1 km to the south.

Top Jobs in the Music Industry

Sting sells his entire catalog of recordings to Universal Music