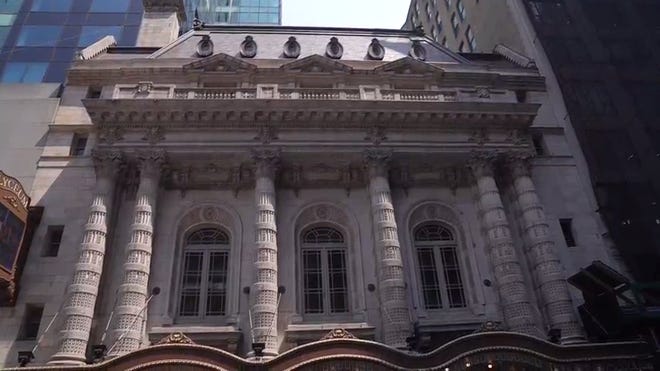 COVID delays for The Music Man, Doubtfire were a godsend, director says

“Four weeks you rehearse and rehearse, three weeks and it couldn’t be worse.”

Thus Cole Porter, in the musical “Kiss Me Kate” of 1948, summed up the gestation period of a Broadway show. Four weeks – six outside – to rehearse the actors, pierce the dancers, throw out the scene that doesn’t work, write a new one that goes, add and delete songs, integrate the costumes, sets, lighting, orchestra.

That doesn’t seem like a lot of time, does it? This is not the case.

Jerry Zaks, the Tony-winning director with two shows opening on Broadway this season, “Mrs. Doubtfire” (preview October 21 and opening December 5 at the Stephen Sondheim Theater) and “The Music Man” (before -first December 20, opening February 10 at Winter Garden), would say: Yes, thank you very much.

“It’s new territory, you know?” said Zaks, who was on his third night of premieres with “Mrs. Doubtfire,” in March 2020, when the COVID curtain fell on Broadway.

New-York C:Broadway is back, but the world has changed. Plan your trip to New York and follow this guide

He never imagined, then, that he would be cursed – and gifted – with 15 full months of downtime.

“We were rushing to open and around 4pm that afternoon our producer Kevin McCollum said, ‘Everybody’s coming home,'” he recalls. “We thought it would be for a month, maybe six weeks. The more cynical of us said no, it will definitely be three months. No one imagined that we would be closing as long as we did. Personally. , that’s the longest I’ve ever worked. “

COVID is a bad wind that has brought Broadway so much good: it has given artists like Zaks an unsuspected time to polish their shows.

“As much work as possible was going on during the gap year,” said Zaks, four-time winner of Tony (“House of Blue Leaves,” “Lend Me a Tenor,” “Six Degrees of Separation” and “Guys and Dolls “), originally from Paterson.

Going to Broadway? :What’s on the list of Broadway shows for 2021, plus everything you need to know about tickets

For example: in the meantime, three complete issues have been deleted from “Mrs. Doubtfire ”and a brand new opening number was replaced:“ What’s wrong with this image? “

“The writers came back with a new opening, where three numbers are replaced with one wonderful big number, and I’m so thrilled,” Zaks said. “It’s always been extremely important in ‘Doubtfire’ that we get the sound of Ms. Doubtfire’s voice to sound as soon as possible, because that’s what the audience really came to see. But before we get to that, we need to establish a whole lot of information, and it was taking too long.

Those who know Broadway know that the first number – indeed the first after intermission – can make or break a show. It’s the roller coaster’s first fall, setting the tone for the rest of the act.

Classic examples are two shows Zaks is familiar with: “Fiddler on the Roof” (he performed in a touring production with original star Zero Mostel) and “A Funny Thing Happened on the Way to the Forum” (he directed a revival in 1996).

“What is the show In regards to?“Director Jerome Robbins kept asking the ‘Fiddler’ crew in 1964.“ He’s a milkman with three daughters… ”they began.“ But what’s the show? In regards to?” he persisted. Finally, someone intervened. “Tradition!” he said. Eureka! A new opening number – and another hit on Broadway.

“Forum”, a farce of debauchery set in ancient Rome, was confusing to the public in preview. The classical setting, the invocation to the theater gods, made them expect something clever. The show was on the verge of collapse in 1962 when it was saved by a new opening number: “Comedy Tonight” (also at Robbins’ suggestion).

“The opening of ‘Forum’ never told the audience what the show was about,” Zaks said. “It never gave them permission to laugh. So Jerry Robbins came in and they fixed it, and it made all the difference in the world.”

No different, Zaks said, from his predicament on “Doubtfire.” Only in this case, the “problem” numbers weren’t bad. Not quite on target.

“When something really sucks, it’s easy to identify it, and also identify what you can do to improve it,” he said. “In the case of ‘Mrs. Doubtfire’ we started with three numbers that weren’t bad in themselves. They were engaging, funny. And now I think we’ve done it.”

The 15 months of fallow were felt in another way. In October, actress Doreen Montalvo, a Broadway veteran (“In the Heights”), died of causes unrelated to COVID. “It was awful,” Zaks said. “Obviously she will be missed. We had to replace her.”

Then the two children in the cast were almost two years older. And now we were on the other side of puberty.

“We had to do a little rewrite,” Zaks said. “We’re taking care of that. We decided that since these kids have been with us from Seattle when the show was tried out, they attended the Broadway rehearsal and got a couple of previews, the idea of ​​replacing them seemed like unacceptable, you know? It didn’t seem like the right thing to do. It won’t affect the story. “

While he was thinking and tinkering with “Mrs. Doubtfire,” he was also busy with “The Music Man,” which was originally scheduled to open on October 15, 2020.

This show, unlike “Doubtfire”, is a long-established and highly regarded Broadway property. Which might not be, you think, so much of a challenge. You would be wrong.

“The process and the task are the same,” he said. “The task is to tell the story as well as you can tell it. This goes for a new production of an old show.”

Zaks is perhaps most famous for his outstanding new productions of old favorites, including his award-winning productions of “Guys and Dolls”, “Anything Goes” and, most recently, “Hello, Dolly!” with Bette Midler. But that does not facilitate the work.

“I hate the word ‘renewal’,” he said. “Looks like something’s dead and in need of CPR. Fortunately, because I don’t have an encyclopedic knowledge of the canon of musical theater – I never have – these shows come to me in a whole new way. I’m trying to pretend they were written yesterday. How could I do it? “

During the 15-month hiatus, he fine-tuned Meredith Willson’s old gem, looking for new ways to make it shine.

“While we were away we had a lot of time to work on the sets for ‘The Music Man’,” he said, “Everything was done by Zoom, obviously. But we met and worked regularly. With something like “Doubtfire”, something new, there’s a lot of trial and error. It’s a constant process of rewriting and recomposing. With “The Music Man” the challenge is how tell a story everyone thinks they know, in a way that makes them feel like they are seeing it for the first time? “

They reviewed the music, the orchestrations, the script. “We didn’t do a lot of work on the script because it was made for us,” he said.

The 15 month leave had a profound effect, not only on Zaks and the creative team, but also on stars like “Mrs. Doubtfire’s” Rob McClure (a New Milford native) and “The Music Man’s” Hugh Jackman and Sutton Foster. They can’t wait to go, Zaks said.

“They all stayed in shape,” Zaks said. “It’s my greatest joy as a director – and my job has many aspects – but what I love is being in the room with three people who are equally good and who work harder than people. could not understand it. They are just tireless. And they are chomping at the bit. “

Jim Beckerman is an entertainment and culture reporter for NorthJersey.com. For unlimited access to his insightful reports on how you spend your free time, please subscribe or activate your digital account today.

Face the Music: Every Word Counts in Annie Gallup’s “Oh Everything”