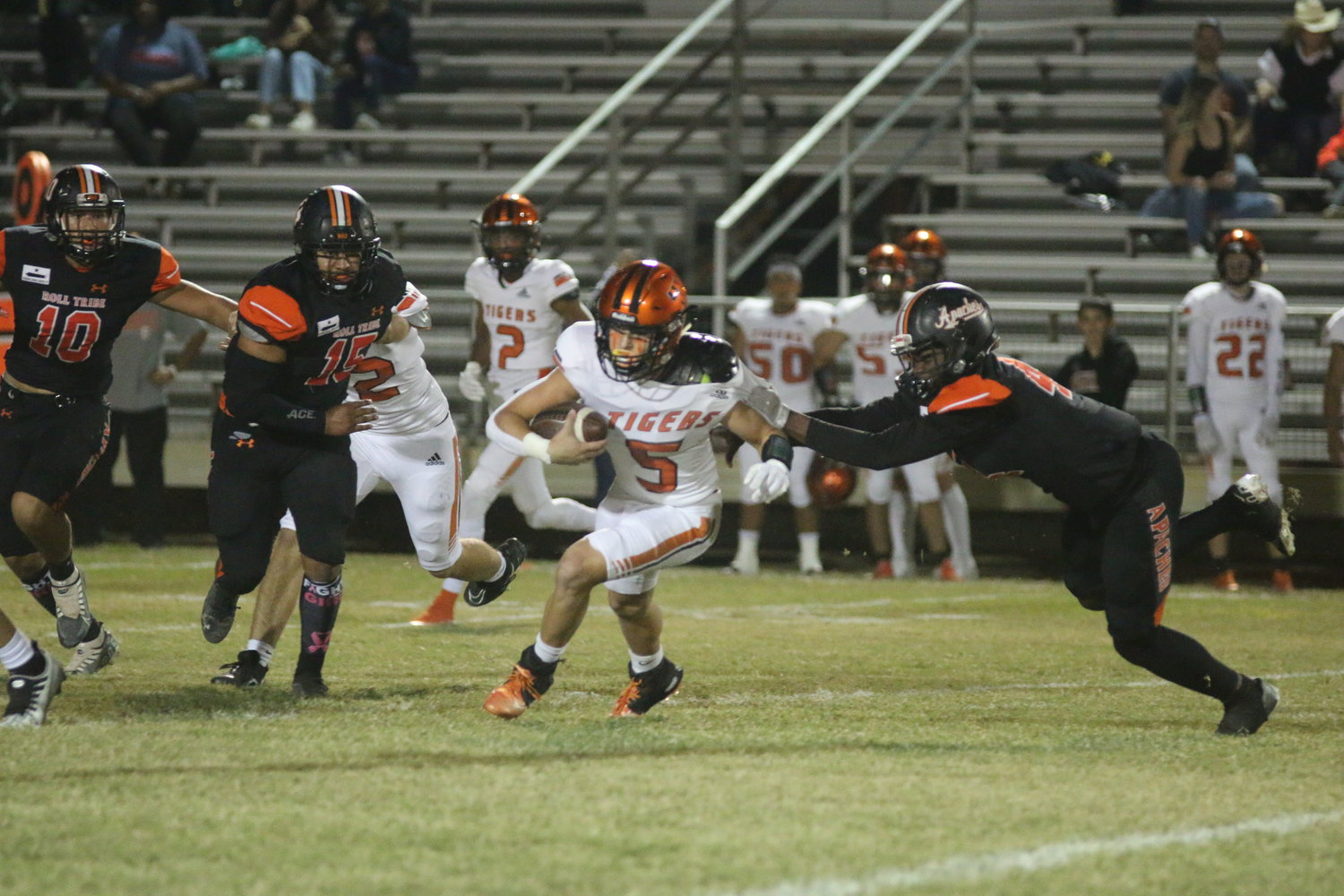 As for the Gonzales Apaches and nearby games – to quote Yogi Berra (and Lenny Kravitz) – “It’s not over until it’s over.”

Although they gave up a tying touchdown on Friday, Oct. 21 to the Smithville Tigers with 1:38 left, the Apaches didn’t panic or concede.

Instead, they created their own kind of music with quarterback Jarren Johnson finding Josh Esparza in the end zone on a 27-yard cornering run with just seven seconds left.

The two also connected in the ensuing two-point conversion as Gonzales cruised to a thrilling 52-44 victory over Pink Out Night at Apache Field to claim a share of second place in the 12-4A2 district.

“(1:38) it’s been an eternity and we have a good offense and we saw things go well offensively tonight by scoring 52 points. It was a great job from the kids tonight,” Gonzales head coach Joey Rivera said.

“As I told the kids, wins aren’t easy in the district and they’re even harder in the playoffs and you have to cherish every one of them. There were mistakes that happened this night, but I’m so proud of these kids, these coaches and this community for supporting us.

Leading running back Derrick Garza, fresh out of five weeks with injury, rushed for 206 yards on 21 carries and scored four touchdowns, while Johnson rushed 11 times for 82 yards and completed 13 of 21 passes for 167 yards and a TD. Esparza caught four passes for 71 yards and a touchdown.

Gonzales got on the scoreboard on his first possession. On second-and-three of the 42, Garza broke free and went 58 yards for a touchdown. Johnson hit Davonte Smith with an assist for the two-point conversion and the Apaches had an 8-0 lead with 10:39 left in the first quarter.

Smithville would also score on their opening possession on a 27-yard TD pass with 6:54 left in the first and the PAT kick made it 8-7. But Garza would respond with his second touchdown of the night, a 70-yard TD getaway, with 5:56 left in the first and Johnson would hit Esparza on a two-point pass to make it 16-7.

In the second quarter, Gonzales returned to the offense after Jason Sanchez recovered Smithville’s bad snap at the Apaches 40. Rocky Gallegos kicked the ball 15 yards out with 7:09 left in the first half. The two-point conversion failed, making it 22-7.

Towards the end of the first half, the Apaches got another scoring drive. Garza scored from 15 yards out with 25 seconds left, then ran into the two-pointer to make it 30-7 at halftime.

Unfortunately for Gonzales, the Tigers made some adjustments in the third quarter that led to 30 unanswered points as they erased a 23-point deficit and took a 37-30 lead.

It started on their first practice of the quarterback when Smithville scored on a 19-yard pass with 9:06 left on third. The PAT went 30-14. With 4:34 left in the third, the Tigers got a 10-yard run from their quarterback. They made a two-pointer to cut the lead to 30-22.

After intercepting an optional pass from Garza, the Tigers tied it, 30-30, with 2:07 left in the third on a 20-yard, two-point TD pass. And after blocking a Gonzales punt on the first play of the fourth quarter, Smithville took the lead on a three-yard TD run and PAT kick to make it 37-30.

“That’s what I was afraid of,” Rivera said. “(Smithville is) a very good team. They took down La Grange a few weeks ago and they have some talented athletes and guys that I was a little worried about. I told our guys that the will to start the second half was very important and they kind of went down and down and down and scored and we got into a lull and made mistakes.

It was the wake-up call the Apaches needed. They rushed for 64 yards in 10 plays with Garza getting his fourth TD of the night on an eight-yard run, but the two-point conversion fell through, leaving it 37-36.

On the first play of Smithville’s next possession, the Apaches created some much-needed turnover when they landed a heavy hit on a receiver, causing him to spit the ball in the air. TJ Riojas grabbed the ball and sent it back to the Tiger 33. On the second and 11, Smith swept a throw 34 yards home for a touchdown with 5:05 left in the fourth, then caught a two-point pass from Johnson. to make it 44-37.

Smithville drove the ball to the Apache 25. Just when it looked like Gonzales might sack the Tigers quarterback and maybe put the game away, he managed to slip away and find an open man in the end zone for the tying TD with 1:38 play.

However, 1:38 is an eternity when a team can move the ball and that was seven seconds longer than the Apaches needed. Runs and passes brought the ball to the Smithville 27 with 14 seconds left, then, using Smith as a decoy, Johnson found Esparza in the end zone for the game-winner and then once again for the pointer to two points closes the score. Smithville would get the ball back and attempt to pull off a “schoolyard recreation football miracle,” but the game ended with an illegal forward called against the Tigers.

This week, the Apaches travel to La Grange to take on the Leopards at 7:30 p.m. on Friday, October 28. If the Apaches win, they’ll clinch second place as Smithville or La Grange are unlikely to beat Cuero in the next two. weeks. A loss to Gonzales doesn’t hurt their playoff chances, but will mean they will likely have to defeat Giddings in the Finals.

“La Grange are a very good team and we could hear that they won quite easily tonight (against Caldwell) and it will be a good test to see where we are,” Rivera said.